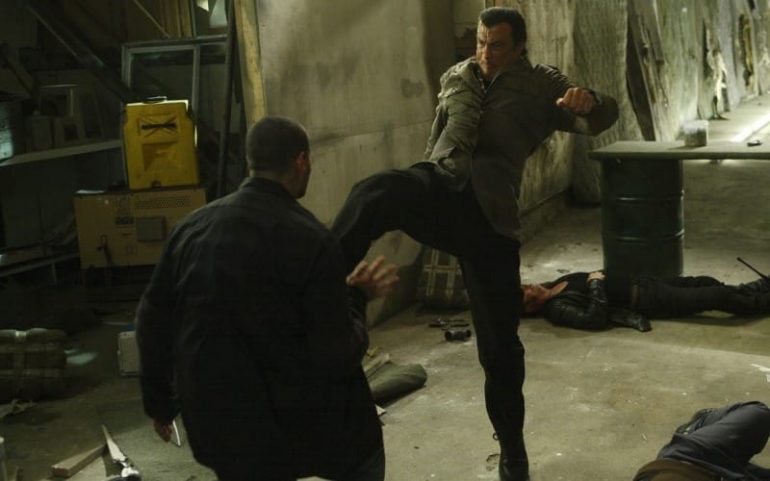 Driven to Kill is pretty poor even for Slow Hand but it’s still fun to watch him maim and murder so many bad guys in cold blood.

Plot: An ex-Russian mobster who is now a crime novelist must confront his past when his family is targeted by violence.

Review: I caught this the other night on cable and I won’t lie, my expectations were minimal. I was indeed correct and Driven to Kill was a pretty terrible film. Steven Seagal’s accent was all over the place as well as being dubbed throughout the majority of the movie.

The action was poorly executed as well with shaky cam galore and strangely managing to be totally unexciting. Seagal at least shows the usual casual brutality and lack of mercy to anyone who gets in his way so he deserves a tip of the hat for that. The highlight of the movie is a fight scene in a stripclub which is always the highlight of any action movie. This is what I was saying in my blog the other day; Seagal keeps the old-school action movie alive and everyone knows that means nudity and violence aplenty.

Most of the acting is terrible and the story is nothing we haven’t seen a billion times before in better movies… and yet, I couldn’t turn away. I know I’m a glutton for punishment but I just love watching Seagal’s movies.

The sheer lack of logic in Driven to Kill is the best part, like how come the police are never around whenever there are shoot-outs, neck-breakings and more going on? The two inept cops on the trail of Seagal and the Russians spend most of the time talking about it over coffee but never actually doing a single thing. After Seagal has killed everyone in graphic fashion he gets to live happily ever after with no consequences whatsoever.

Did I mention that he’s a writer in this movie? No? Well he is and he writes about various Russian mob games and tricks of the trade because it’s what he used to be… but he never really stopped. See, he’s different from the bad guys because he’s Steven Seagal and the rules don’t apply to him so he can snap limbs like he’s trying to break a world record.

I think he is meant to be Russian in this movie but God knows what accent that was he did; he sounded French at some points…

Overall, Driven to Kill is pretty poor even for Slow Hand but it’s still fun to watch him maim and murder so many bad guys in cold blood.