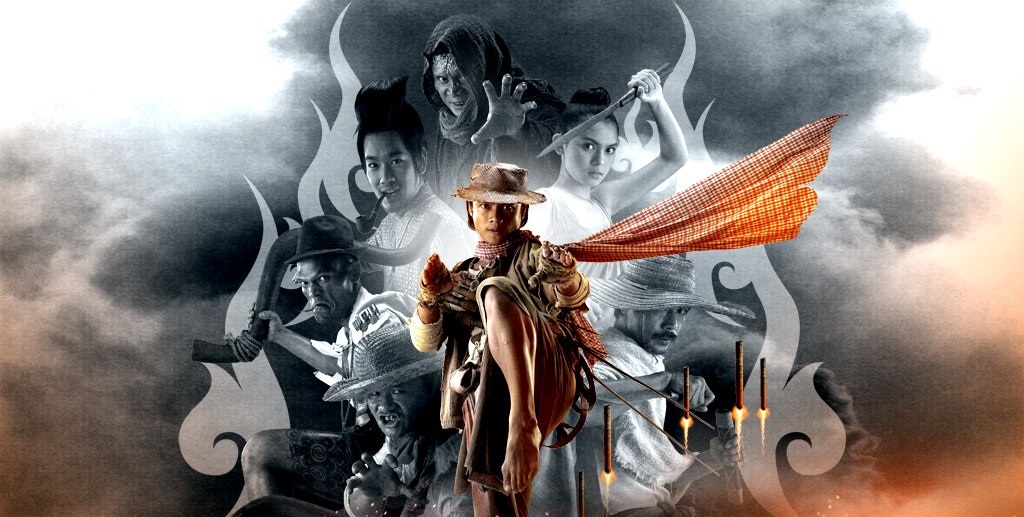 Dynamite Warrior will be an acquired taste but it certainly wasn’t for me; too much CG, nonsensical story and overlong. It’s not something I would recommend even to die hard martial arts fans.

Plot: The story is set in 1890s Siam. Siang (Dan Chupong) is a young Muay Thai warrior and rocketry expert who steals back water buffalo taken from poor Isan farmers by unscrupulous cattle raiders. He is searching for a man with a tattoo who killed his parents.

Review: You know how sometimes you watch a film and think, “what the Hell am I even watching?” That was very much the case with Dynamite Warrior.

I picked it up for 3 dollars on DVD from a bargain bin a few weeks ago as I’d never seen it before and I had become a fan of star Dan Chupong after Born to Fight. He has the moves but his choice in projects isn’t quite so good.

First off, the dubbing was atrocious but I just thought this was one of the most batshit martial arts movies I’ve seen in a long time and not really in a good way. I knew from the first few minutes when our hero makes his entrance riding a flying missile that it was one of those movies and wouldn’t really be my cup of tea. There is a lot of energy to the fight scenes and Dan Chupong’s badassery is never in question but the plot just wasn’t that interesting and it was all just really dumb.

I would like to see Dan Chupong in more (better) movies as he undoubtedly has talent but this was just overlong and never really engaged me. There is piss poor CGI which as I’ve said a billion times before has no place in a martial arts movie so it takes away from the action as does the wirework.

There is all kinds of supernatural nonsense and the bad guy is unbelievably lame who can take over other people’s bodies or something. By the time it eventually ended I was barely paying attention; admittedly there are a cool few moments during the climactic fight but it’s all such total bollocks that you won’t care.

Overall, Dynamite Warrior is anything but explosive and not something I plan on sitting through ever again. If you like your martial arts movies silly you may find something to enjoy but this type of movie is certainly not for me.