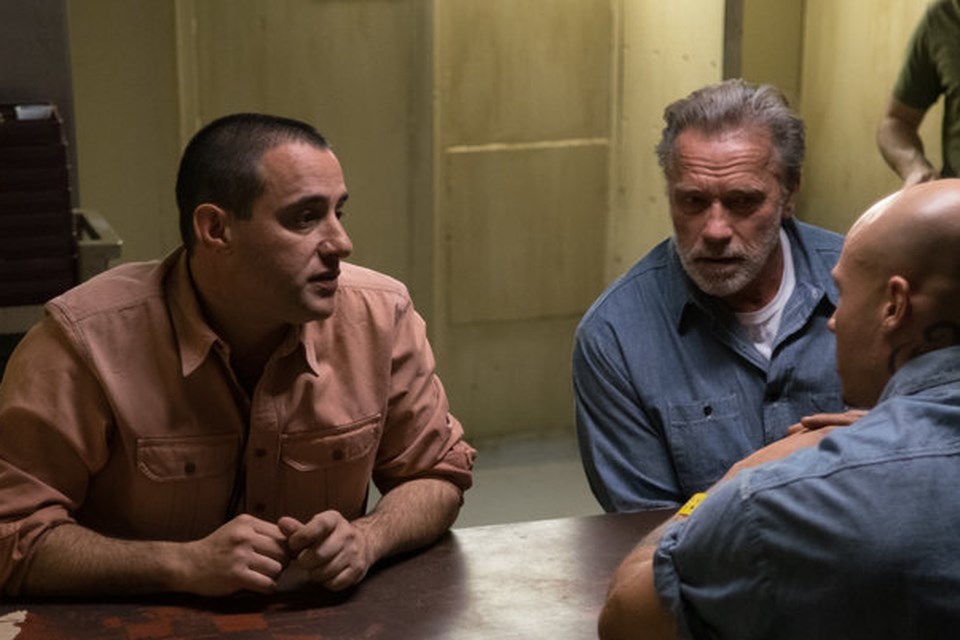 This week’s interview is with Elliott Lester, the director of the new Jason Statham actioner “Blitz”.

Eoin: I’d like to start off by asking, what first got you into film? Was there a particular movie you watched that made you think “THAT is what I want to do?”

Elliott: I got into the business quite late actually; there are a lot of directors who grow up, making films. I come from a very creative family, my mother is a painter and my brother is a fine artist. I think I was just obsessed with the business, and all of my best experiences had come through cinema, all my greatest memories. First time I made out with a girl was at the movies, my favourite things that have happened in my life were to do with movies. I think there was just something in me and I became obsessed with the business from the age of about 18. I moved back from India and I became truly, truly obsessed.

It wasn’t that I wanted to be a director necessarily but just that I really wanted to be in the entertainment industry and just do what ever I could. I started at the very bottom as a production assistant and I moved to America with about 800 dollars in my pocket, a lot of cheek and a bit of chutzpah.

I became what is known as first assistant director and worked for Tony Scott, Tony Kaye and worked on American History X, I literally worked on hundreds of movies.
It was when I was around the age of 29-30, when I first directed something. That’s when I started making music videos and that’s when I became truly invested in it and believed I could be a director. I was a late bloomer.

Eoin: How did you get your first job in the film industry?

Elliott: I was living in Leeds at University and a friend of mine was directing a music video for an obscure little band called CUD and I was a production assistant for their song “Purple Love Balloon” and I just loved it. From then, I went to work in London and worked on Japanese commercials, but my first job in the States was working on Country music videos as a production coordinator.

Eoin: What was it like to work with Tony Scott?

Elliott: They were all great guys to work with, the interesting thing is you really don’t know anything about directing until you’ve stood in their shoes, saying “put the camera’s there, have the actors say this”, it’s very existential and people can tell you how it’s done but you don’t know until you do it yourself.

My first one was a music video for a female singer and it was quite nerve racking actually. I’d been on hundreds of sets and seen other directors and assisted them with complicated shots. I was actually petrified to move the camera and in that moment I didn’t know what I was doing at all.

Eoin: You recently directed Jason Statham in the action thriller “Blitz”, which hits BluRay/DVD on August 23 and is one of the best movies Statham has done. It feels like an old school action thriller in the vein of “Dirty Harry”, with an excellent script by Nathan Parker (adapted from the novel by Ken Bruen). Was it your intention to create a gritty, realistic movie like that?

Elliott: I like to think of the film like that, Ken is a brilliant crime novelist and he writes pastiche. The first movie of his that was produced was “London Boulevard” which was a riff on “Sunset Boulevard”. “Blitz” was 100% “Dirty Harry” and when I talked to Ken about it, that’s exactly what he wanted and wasn’t precious about us making the changes at all. The screenplay is what hooked me, and Nathan Parker who wrote Moon, (which is an unbelievable screenplay); wrote it as an ensemble, but it’s gritty and I suppose it’s not meant to be taken too seriously. You can’t put those elements together and pretend that it’s an incredibly high brow film; you just watch it, enjoy it and go home. There’s cinema for entertainment, cinema to be intellectual, cinema to move you and cinema for fun and that’s what this is.

Eoin: There is plenty of humour in the movie and I love how Brant is so refreshingly politically incorrect, especially in this age of PG-13 family fare.

Elliott: Brant’s a dinosaur, it’s interesting you made that point, you know how in Mad Men, it’s all so politically incorrect because the men are allowed to get away with whatever they please? You would never get away with that these days. Brant is a man out of his time and Jason embraced the role to the fullest extent, I can assure you of that.

It was my job to put the best cast I could around him. We really got lucky with Paddy Considine and Mark Rylance, who is probably one of the greatest theatre actors in the world. He just won a Tony Award actually. Aiden Gillen was absolutely brilliant and he’s a true method actor. He immersed himself in the character completely. We didn’t know who Aiden was; we just knew who Barry Blitz was. He lived in this horrible council estate in England and stayed there for the duration of the shoot. He changed his diet, ate crappy food and I think he’s one of the best actors I’ve seen on screen. He was completely visceral and a huge, huge talent. I think if anything, to have him in a film is such a delight.

Eoin: I’d love to see more of Brant. Do you have any plans on a follow up to Blitz?

Elliott: For me there won’t be because my view is, I’ve done my one, so I think you just have to leave it there.

I actually had very different ideas for who should play Brant, ranging from Liam Neeson to Jude Law which would have made the film very, very different. I think this was actually number 4 or 5 in the book series so, I actually don’t know how a sequel would look… maybe. It’s not a conversation I’ve had with the studio. I think it would actually work as a TV show though.

I sat down with Jason and he talked about where he was in his career. He was saying that he wanted to do something a bit more serious, something with a bit more gravity. I said “if we’re going to do this, then let’s try and push it”. You’ve got to remember though that Jason is a brand, a much loved brand. He’s kind of taking over the mantle of where those action stars have been before. It is true what they say; he is kinda like the new Bruce Willis.

Eoin: He’s basically the only real mainstream action star left, as all the legends are getting older.

Elliott: Thing is, he’s no kid, he’s actually 44. I think Liam Neeson has proven that you can be an octogenarian and still kick ass. Jason’s prowess is in his action and fighting sequences, he is incredible to watch physically.

Eoin: I hear Jason Statham does all of his own stunts. What was the experience like working with him?

Elliott: Not all of them, but he does a lot of his own stunts. He does get involved in the fighting though. He definitely prefers kicking the shit out of people rather than singing a sonnet. As you say, there isn’t anyone who is filling that place now. There are some good kids coming up though like Tom Hardy, Chris Hemsworth, Chris Evans and Alex Pettyfr. But you’re right, who’s going to be the next shit kicker? Well, it’s him. I think he made a great decision in doing “Blitz”, it’s done well internationally and it’s had some good reviews as well.

Elliott: Well what I say to them is, don’t watch it. For example, I went to watch “The Expendables” last year and I went in not expecting it to be the greatest movie ever but it was fun, I had a blast with it. I mean, you can have “Black Swan” and “The Expendables” at the same theatre, it’s a choice.

Eoin: What was the hardest challenge about making the film and can you tell us about it?

Elliott: I really have to tell you, the shoot was incredibly pleasant. Jason was never late and I don’t think there were a lot of problems. Pre-Production was great, no one got fired and there were no beatings. Overall it was a very pleasant experience. But it’s always a different game on every film, but this was a studio movie.

Eoin: He comes across really laid back and likable when you see him interviewed.

Elliott: Yeah, he was. I’ve done my Statham movie and I’m ready to work with other stars but yeah, he was a delight. I’d like to tell you about working with the other stars as well. I mean, Paddy Considine who is just one of the richest performance actors in England and I never thought I’d get that level of talent. So many of his scenes ended up on the cutting room floor, which brought tears to my eyes.

Eoin: I get a lot of emails from aspiring filmmakers. Do you have any tips for them on how to break into the business?

Elliott: Absolutely, this is what I tell everyone who wants to get into the business. Never take no for an answer and you have to fail every single day. You have to understand failure and embrace it. You’re gonna fuck up and make big mistakes, you have to understand that it’s part of it. Everyone says don’t give up, but you mustn’t give up. So many people give up and they get discouraged, you just have to keep failing and failing better to paraphrase Samuel Beckett. You’ve got to keep fucking up and open your mouth to the wrong people.

My first movie was called “Love Is The Drug” – I was so driven but very naïve. My producer said “We need James Woods; we need an actor like that”. So, I went and staked James Woods out at his hotel and I waited for 10 hours. He came out, just back from a poker game and I said “James, I’m Elliott and I’m a director. I’ve got a script written by Wesley Strick and I really want you to be in it”, and he did. He didn’t end up in the final film but still…if you’re dumb enough not to know better and to keep trying, that’s the thing.

Eoin: Can you tell us about any future projects you have in development?

Elliott: I’m attached to a couple actually, I’m attached to a project called “Balcombe Street” which is a project set in England in the 1970’s, based around a very famous siege between the IRA and the police. It’s produced by Chris Coen (Shadow Dancer, 2012) and Rebecca Brown.

I have another project called “Black Heaven” which is about experimental medicine,about a doctor who is trying to cross over to the other side and a crime that is taking place on the other side of our conscience.

There’s a book I’m about to be attached to but I can’t go into that. I’m always shooting commercials and videos as well.

Eoin: And that’s us, thanks so much once again for taking the time out for our Q & A and all the best with your future projects.