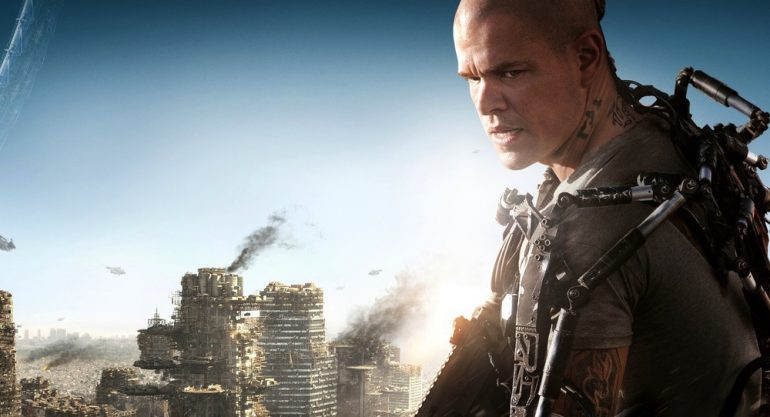 Elysium is packed with inventive sci-fi action and cool weapons with Matt Damon surprisingly convincing in a badass role.

Plot: Set in the year 2154, where the very wealthy live on a man-made space station while the rest of the population resides on a ruined Earth, a man takes on a mission that could bring equality to the polarized worlds.

Review: I had little expectations going into Elysium as I thought it was just going to be a “Rich People are Evil!” type story and admittedly it was but there was far more to it.

Neill Blomkamp is an exceptional director with an amazing visual style and the effects in the movie are pretty much flawless with the coolest looking droids I’ve seen in many years.

The story is genuinely moving with characters you care about and Blomkamp paints a rather bleak future however, the movie isn’t depressing as it has plenty of humour and it rockets along at breakneck pace;.

I have never been a bit Matt Damon guy as I always found him rather bland but this is one of his better movies; he’s incredibly sympathetic and his character really does go through Hell.

Sharlto Copley steals the show as the utterly insane Kruger who has the best lines of the film- “Oh did you cut yourself? You might wanna get that looked at!”

Blomkamp loves to create awesome weapons and this movie is no different; you’ve got force-fields, mech suits and other sci-fi goodies which make the action scenes literally out of this world.

It’s a refreshingly adult-oriented blockbuster and deserves to be a massive hit, not just for the sheer scale of it but also for its heart. It has several messages like how we are all in this world together and to not forget where you came from.

I like how the primary language spoken in America in this future is Spanish, which is probably what will end up happening as the population continues to grow.

The music was a bit Inception-esque in places but that is no bad thing; it has a real genuinely epic sense of scale which really adds to the action scenes and gives added emotion to the story.

The film isn’t flawless though; I found Jodie Foster a bit unconvincing as the villain and she didn’t really work for me; there is also some annoying shaky cam in places which got distracting during the climactic action sequence.

Overall, Elysium is a massively entertaining sci-fi yarn with some spectacular action and visuals only let down by Jodie Foster as a weak villain and an overuse of shaky cam.