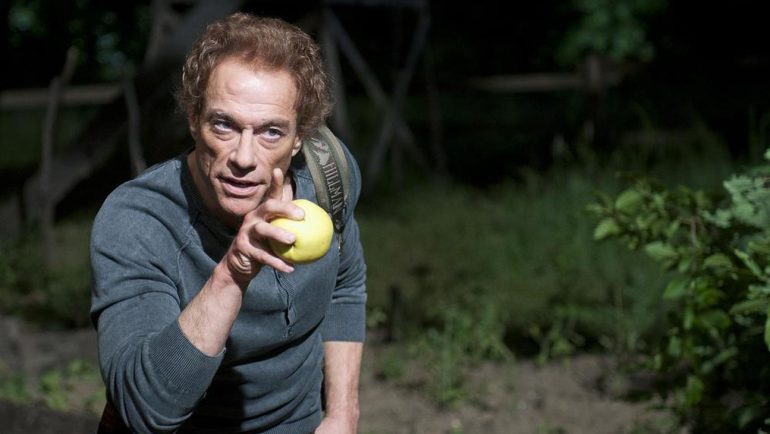 Enemies Closer may not be a classic but Jean-Claude van Damme steals the show as the villain making it worth a rental at least.

Plot: Deep within a forest on the US-Canadian border, two sworn enemies must work together to escape a ruthless drug cartel hell-bent on retrieving a drug shipment which went missing there.

Review: Enemies Closer has been one of my most anticipated movies of the year, simply for Jean-Claude Van Damme’s turn as a psychotic villain; was it worth the wait?

For the most part, yes for JCVD who utterly steals the movie; as soon as he walks on screen he eats it up. His entrance scene is the highlight of the movie which is violent but also very funny at the same time:”Think of the children”. Van Damme is a complete maniac in this movie and as I stated before he very much is channeling the Joker but manages to be suitably different and brings his own edge to the role.

I actually think Xander may be one of JCVD’s best characters yet; he sticks with you long after watching and as soon as the movie is over you just want to watch it again.

The movie rockets along at a speedy pace and it’s over a bit too quickly; frankly it could have been 3 hours long and I’d have been happy.

What of the action? Well from what I could see the fights were excellent but it was too darkly lit a lot of the time and I couldn’t see what was happening, which was a bit distracting.

The supporting cast including Tom Everett Scott and Orlando Jones were a bit bland and forgettable but I think that was a deliberate choice as it just gives JCVD more to play with.

Kris Van Damme was great though as Francois, one of Xander’s goons and it’s nice to see him in a bigger role.

Some of the acting was pretty dodgy though, namely the guy with the beer cans… what the hell was that all about?

Aside from that though, I had a blast with JCVD on pretty much career-best form and a really tight pace.

Overall, Enemies Closer may not being amazing but it’s worth watching just for Jean-Claude Van Damme’s scene-stealing villain.