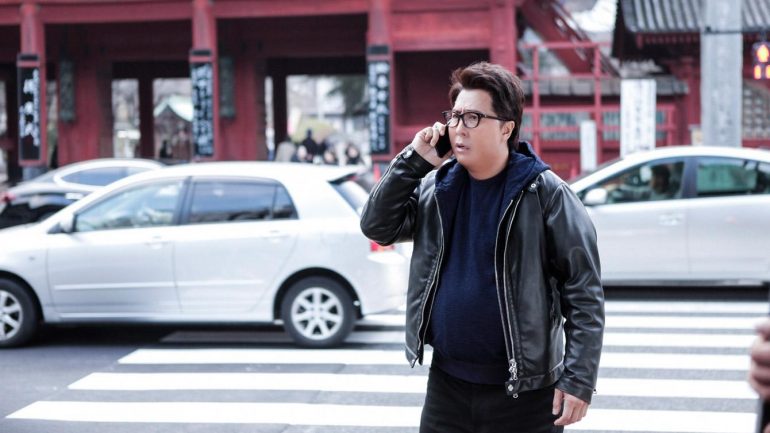 Enter the Fat Dragon has a sense of fun and it’s nice to see Donnie Yen show a more humorous side but despite some entertaining fight scenes a lot of the jokes fall flat and it feels like a step back after Ip Man 4.

Plot: Sent to Japan on a routine police escort, Officer Zhu is excited to have the chance to requalify for full time duty as a police officer. However, after a series of mishaps, the mission goes terribly wrong and the suspect Officer Zhu is escorting suffers a mysterious death. Zhu enlists the help of wok-wielding restaurant owner and a former undercover inspector to solve this murder mystery

Review: The original Enter the Fat Dragon starring Sammo Hung is a martial arts classic and with this remake Donnie Yen tries to recapture the same magic however, it really is a remake in name only with a completely different storyline and characters.

Whereas Sammo was genuinely bigger when filming Enter the Fat Dragon it was always impressive watching him be so light on his feet in the fight scenes. Donnie Yen wears a fat suit in this new movie and goes for a goofier even more farcical tone that doesn’t always work but it’s not without its moments.

There are several laugh out loud scenes and the movie is such harmless nonsense that it’s difficult not to just get swept up in it and enjoy the ride. Yen is as sympathetic as always as Fallon Chu, a cop who can’t let go of his job which affects his relationships, especially with Chloe who he is meant to marry. While on his way to get wedding photos done he is caught up in a robbery and ends up screwing everything up with not only his girl but his job. He is demoted and ends up working in the evidence locker where he lets himself go and puts on weight… thus becoming the fat dragon. When he is asked to escort a prisoner to Japan this could his chance for redemption but since when do things ever go as planned?

What’s odd is that even though Fallon has put on weight it doesn’t really affect his fighting style and it isn’t a major part of the story; why does him being a little fatter make him any different? He still seems to be invincible and never gets injured or tired. Surely it would have been more interesting to see that he had become slower and struggled to fight but it was his sheer willpower that got him through…

Chloe is mostly annoying and the film has far too much juvenile humour like fart jokes and slapstick but that is what they were going for so I’m sure it will find its audience.

There are several references throughout to some of Donnie’s older classics like Flashpoint and SPL but they mostly remind you that his movies used to be better.

As you would expect there are plentiful fight scenes and impressive stunts but sadly there is some unconvincing CGI during the climax which really just confirms how superior the original Fat Dragon movie was.

I thought the music score was one of the highlights as it was really heroic and added an extra energy to the fight scenes.

Overall, Enter the Fat Dragon is a bit of a letdown after the superior Ip Man 4 and it doesn’t hold a candle to the original Sammo Hung classic but it has a sense of fun that is at times infectious. This really is for die hard Donnie fans only.