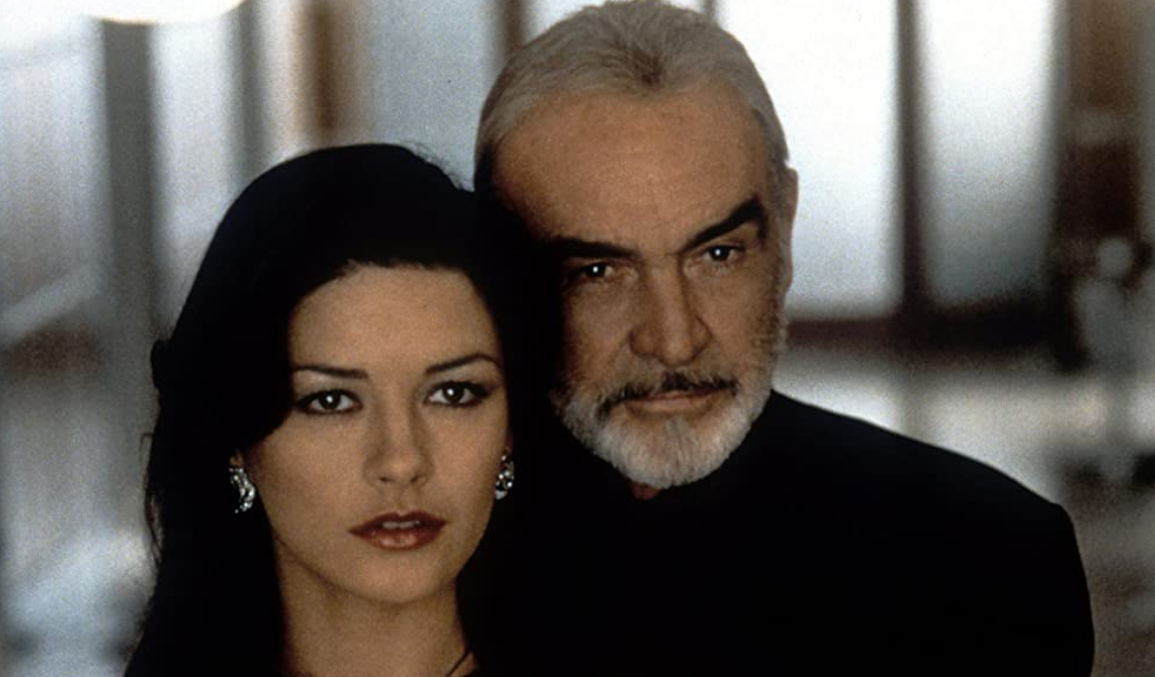 Entrapment feels like a missed opportunity especially when you read about some of the planned set-pieces that ended up getting ditched. It’s not a particularly memorable or exciting picture  but the climactic heist is well thought out and Sean Connery never disappoints so it’s certainly worth watching at least once, especially for Catherine Zeta-Jones looking perfect.

Plot: Insurance investigator Virginia “Gin” Baker (Catherine Zeta-Jones), looking into a stolen Rembrandt painting, suspects that accomplished thief Robert “Mac” MacDougal (Sean Connery) is responsible. She decides to go undercover and help Mac steal an ancient artifact. When a suspicious Mac confronts Gin about her real intentions, she claims that she is, in fact, a thief and that the insurance job is a cover. To prove it, she proposes a new target that could net them $8 billion.

Review: Entrapment is described as an Action/Crime/Romance but there is very little in the way of action so if you’re expecting fights and shoot-outs then this isn’t that kind of movie. So why am I reviewing then? Because it’s a Sean Connery movie and there is enough tension especially in the finale to keep things entertaining.

Let’s face it, the only really memorable aspect of this movie was Catherine Zeta-Jones crawling under the lasers looking like an absolute goddess but it’s still a fun if unspectacular picture.

While doing my usual moseying around on IMDB I was reading how Ronald Bass’ original screenplay had additional spectacular action sequences involving Mac, including a robbery taking place onboard a train, but it would have made the budget over $130 million. The final movie removed many of Bass’ envisioned action scenes and came in at $70 million which explains why there isn’t much action.

I also had no idea that Antoine Fuqua was briefly attached to direct, but he also wanted to increase the action sequences including a huge car chase for the scene where Gin and Mac escape from the antiques dealer, and the climactic heist was to feature more high-tech gadgets and a much more intricate escape. Connery apparently didn’t approve as he thought it would have made it too similar to The Rock but I would have had no issue with it as it really needed a few more set-pieces.

Anyway, despite not being all that exciting a movie Connery is still at his crotchety best as he teams up with Gin for several big money heists; he barks orders at her regularly trying to hide the fact that he has growing feelings for her. I remember at the time everyone thought it was a little creepy due to the age difference (39 years!!) between them and even watching it now it’s still a bit off.

I hadn’t watched Entrapment since it first came out back in 1999 so I had totally forgotten how it ended and it has some surprising twists; this keeps things interesting so you’re never quite sure who is playing who.

There is a great supporting cast including Ving Rhames and Will Patton who add to all the intrigue although I always found Maury Chaykin’s Conrad Greene just a gross character but he is meant to be unsettling making you feel incredibly uncomfortable any time he is on screen.

What’s really sad is that I could tell it was Christopher Young doing the score as it had similarities to his music from Swordfish proving that I really need to get out more. Still, it’s an exciting score which particularly makes the final heist more thrilling.

Although it isn’t packed with action I still found myself engaged for the entire runtime as I just love heist movies and the way some of the robberies are thought out is quite ingenious. I also of course enjoy watching Connery in anything and he has a few enjoyable one-liners. Catherine Zeta-Jones also gives a strong performance nailing an American accent and it’s easy to see why Mac would fall for her.

Overall, Entrapment may not be action-packed, but I still enjoy the characters and the unpredictable story; the final heist is exciting too with Connery and Zeta-Jones making for an engaging duo. They probably should have kept it strictly business so it would be less creepy but at least there aren’t any prolonged love scenes.