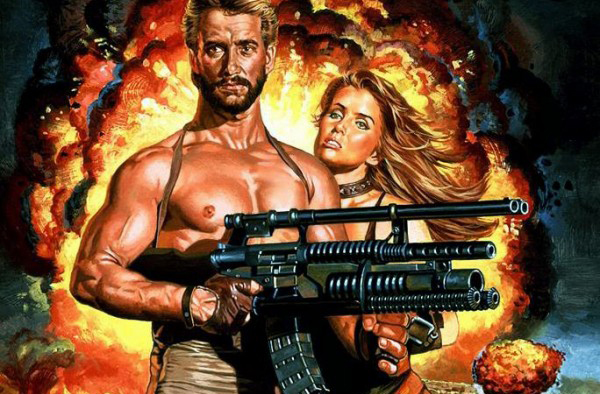 Equalizer 2000 is a little gem of a film with plenty of action and Slade is one of my favourite Richard Norton characters. Sure, it’s super cheap looking but that’s kinda why I like it.

Plot: In a bleak, post nuclear future world, warring factions struggle to claim the Equalizer 2000, the one weapon powerful enough to guarantee survival.

Review: Man, I love these kinds of movies; this is no relation to the Edward Woodward TV series or Denzel Washington movie but it is a low budget Mad Max clone starring Richard Norton.

He plays the awesome badass called Slade, he’s a badass because his name is Slade and he has a righteous beard. It’s essentially a love story between a man and his gun with Slade shooting hundreds of bad guys with one of the coolest weapons of all time. It never seems to run out of ammo, it fires grenades and really is a must have for all your post-apocalyptic needs.

Keep your eyes open for one Robert Patrick as one of the main villains called Deke too; he appears to be dressed in Civil War attire which was one of the cool aspects of this film. Some of the costumes are obviously a bit 80’s by now but the film had a great look with everything looking dusty and… well… post-apocalyptic.

Some of the acting isn’t the greatest but this movie has wall to wall action with real explosions and shoot-outs every 2 seconds; there is some decent camera work too, although I probably would have cut the scene where there is a fly on the camera… yup.

Norton barely says anything but lets his gun do most of the talking and God help anyone who gets in his way.

The music is terrible and incredibly cheap sounding but once again, that’s kind of the appeal of a film like this. The story is also pretty much exactly the same as Mad Max so it doesn’t win any points for originality.

Overall, Equalizer 2000 is a little gem of a film with plenty of action and Slade is one of my favourite Richard Norton characters. Sure, it’s super cheap looking but that’s kinda why I like it.