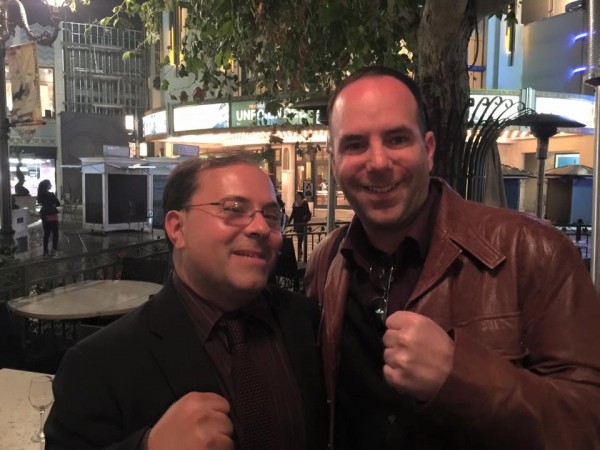 Ernie Barbarash is the director of Pound of Flesh, the new Jean-Claude Van Damme film which gets its full release tomorrow.

This isn’t the first time he and JCVD have worked together as they made 6 Bullets and Assassination Games.

Ernie stops by The Action Elite and talks about putting the movie together.

First of all congratulations on Pound of Flesh; it’s a great action movie with JCVD at the top of his game.

How did the whole concept come up and how did you get involved?

Well it’s funny; it all started with Joshua James’ script which was a little bit different. It had the same basic concept but it was set in a different place and there were a lot of other characters. It wasn’t just him and his brother; there were a group of guys and had more of an Expendables kind of feel.

I read that script as it was sent to me as a writing sample from Josh James for another project and then some years later I was approached by somebody to do a (different) Van Damme movie. I don’t remember what it was but the script wasn’t very good and I just said “You know what? I have a really good one for Jean-Claude”.

I remembered Pound of Flesh and Josh sent me a new version which was so much better and quite different. It was really the story of him and his brother which I just loved. Of course it’s an action film and it’s got Van Damme with a great fight choreographer in John Salvitti so the action’s gonna be great!

But then to have a story and characters that really work and even God forbid a few philosophical touches perhaps, it really makes the whole thing more interesting and better to work on. So in answer to your question it was very much a product of the script and Josh’s work.

Part of it too was the script was good, then you realize that it’s an urban legend (guy wakes up in a bathtub full of ice to find out his kidney is missing) but the thing is organ theft really happens and there have been other films about it! When we were shooting in China we woke up one morning to a headline about a man who donated his kidney to buy an iPhone (laughs). It’s not quite organ trafficking but you’re going Oh my God; there are situations and places where people do crazy things.

So the thing was the story worked really well and that’s what drew us to it. It’s often what’s great about films like this is the story and the script are always there and often so much of the stuff that comes my way needs so much fixing and so much work and this really was not the case with this script. Josh is such a good writer so I think that’s why. So despite all the challenges we faced in making it we all come together and say “we’ve got a really great script so let’s make the movie good”.

We all had some good ideas while filming; I had some and John Salvitti had some about the fight choreography that really enhanced something. Jean-Claude had his own ideas about the character and the casting helped to. You make casting decisions and it instantly changes the tone and what you’re going for. Because I come from the theatre I’m actually very open to casting the best actors that walk through the door for the work and adapting to them. As opposed to going “well in the script, the guy’s a redhead” so you’re just auditioning redheads. It’s become a silly way to work…

How did you come across John Ralston who was perfectly cast as George?

You know what? Literally it was an audition tape that had been sent to me from a Canadian agent; I just so happened to see John in an independent film that a director I worked with many years ago which was shot in Toronto as a passion project and John played a really evil guy. It was a completely different role and from what I remember he was a father who was having a relationship with his daughter and was just a horrible, horrible person. It was so different from this role but I remembered him and wanted him to do an audition on tape for the film. I thought wow, he’s really got something. I mean there were people who looked more like Van Damme but then I thought it would be a mistake to just cast simply on the looks.

Short of JC playing his own brother again, you really have to go for the best actor who really gets the nuances of the role. So yes, we had to do some explaining about how they grew up differently and why they had different accents but I think it was the purest and most beautiful way to find the right actor for the role. It wasn’t just because his agent called or he was insanely famous; it wasn’t any of that stuff. It was purely his talent that got him the role and I would love to keep working with John.

The “splits” scene is already an instant classic where the audience really cheered during that moment. Talk us through how that came together?

It’s funny, originally that was a really short scene where we were asking how could he exchange a punch or kick with one of those guys and then they would drive off and it was more about the car chase. But then what happened – it was something like me and John Salvitti were sitting in the coffee shop near my house and I remember while we were talking about the fight sequences, an email was forwarded to me by Kirk Shaw, the producer from one of the distributors asking if Van Damme was going to do the splits at all in this movie as the Volvo commercial had just come out.

I kinda laughed as I thought everybody is going to want the poor guy to do the splits for the next 20 years; so we joked about it and then John went away and came back a few weeks later. He says what about this… and I said “Oh my God, this is brilliant; he gets to do the splits in the movie but in a natural and organic way. People are going to love it.”

Then we were shooting it and there was JC doing the splits; I was worried that everybody would say we doubled him and all that stuff. So we did the really long slow mo shot where you get to see his face and can tell that it’s him. I made sure we recorded on everybody’s iPhone possible while shooting all those angles so we could see he was really doing it. He’s not 20 anymore and yet people keep coming up and asking him to do things like he was still 20 now and for the most part he does and that’s the miracle of it. I keep saying “aw come on; you guys just want the same thing but the audience wants something new”.

That’s what I loved about what John Salvitti did here because (as we discussed at the beginning) he took some of the old moves and put in new work with more grappling. Salvitti is the real deal; he literally trains Marines in the desert and hand-to-hand combat so he knows really well what works in the field.

So that was a lot of fun and a few months later shooting that scene the amount of times Mike Leeder got hit in the face was something else (laughs). You’re only seeing it twice but can you imagine the amount of times it took to get it right? These days I try to shoot as many fights as possible in slow motion; not that they necessarily play in slow motion, in fact most of them don’t but it’s just in case there’s a great move that’s just a little too fast for the eye to see.

You can just cheat it enough that you’re thinking of seeing it at real speed but you’re really seeing the work people are doing. The way I see it if guys are really getting hit and really getting physically pounded during these sequences, you want to show it and make it worth their while.

Was the splits scene the toughest scene to film?

That one was tough but it rained during that scene a lot but not fully so we couldn’t just make the scene a rain scene. It rained on and off so we had to start/stop which definitely made it one of the toughest scenes. The end fight was also pretty tough and there was a lot of real work in a kind of tough location. It was a situation where the power kept going out for hours.

A lot of the scenes were tough only because we were trying to do more than the money and schedule we had, so even some of the dialogue wasn’t physically tough but there were a lot of things to do at once.

Thanks so much for taking the time to chat with us and all the best with the film. Until our next meeting…

Pound of Flesh will be available in theaters and on iTunes May 15th.