John Carpenter’s classic sci-fi action flick Escape from New York is getting a 4K and Blu-ray upgrade courtesy of Studio Canal. Looks like it will be in the UK only but I have a multi-region Blu-ray player so I just might have to pick it up as it sure looks purdy.

Synopsis: The year is 1997 and in a police state future the island of Manhattan has been turned into a maximum security prison. The rules are simple: once you’re in, you don’t come out. But when the President of the United States (Donald Pleasance) crash lands an escape pod into the centre of the city after fleeing a hijacked plane, a ruthless prison warden (Lee Van Cleef) bribes ex-soldier and criminal Snake Plisskin into entering the hazardous Manhattan and rescuing the distraught president from the twisted world of New York and from the demented clutches of its new ruler The Duke (Isaac Hayes) in John Carpenter’s cyber-punk, action, suspense spectacular.

This 4-disc limited Collector’s Edition of John Carpenter’s classic Escape from New York has been stunningly restored in 4K. This release is beautifully packaged with a stylish, newly commissioned illustration on the cover. It contains a 4K Blu-ray of the feature as well as a Blu-ray feature disc, extra features disc and the original soundtrack on CD. It also contains 5 artcards, a newly illustrated theatrical poster and booklet containing behind the scenes stills, articles and an essay from celebrated film journalist Kim Newman. 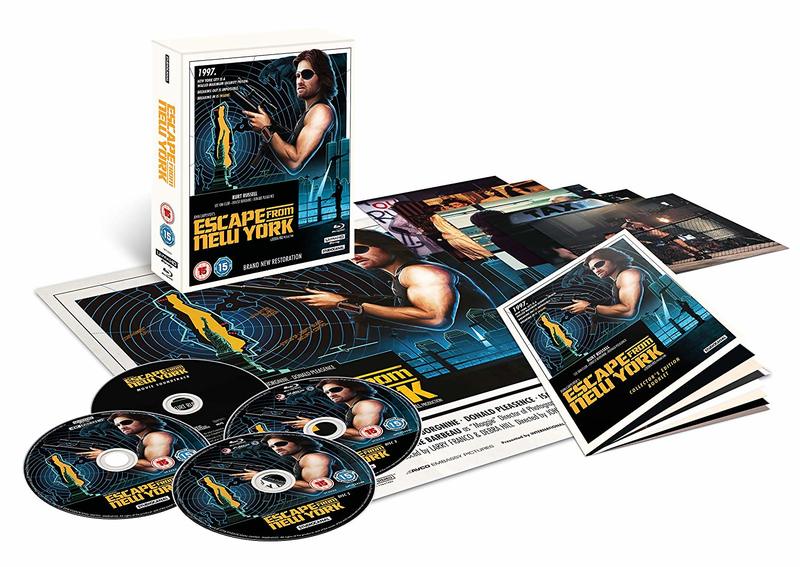