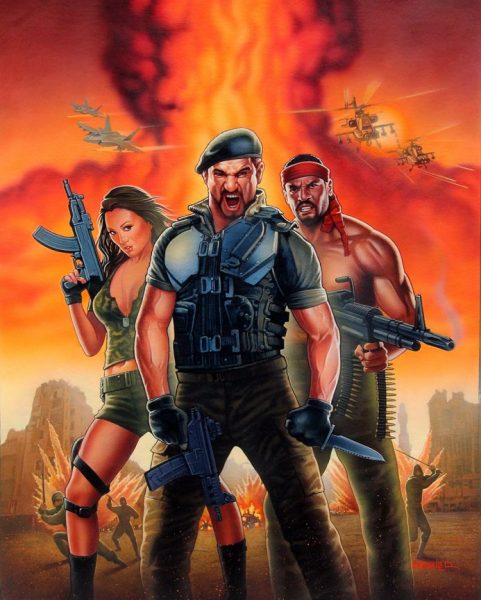 Until recently there had never really been that many books about action movies; it was always a genre that critics scoffed at and never gave it the respect it was due, despite the fact it’s the most popular movie genre at the box office. Thankfully, there are some true life action heroes that have put some fantastic books together featuring interviews with action stars, reviews and much more. There are also a few books which focus on beloved franchises; so here are some of the best books on action you’ll ever read.

The Good, The Tough & The Deadly: Action Movies and Stars &

david j. moore has (so far) written two huge tomes on the action genre; the first one entitled World Gone Wild: A Survivor’s Guide to Post-Apocalyptic Movies is exactly what it says on the cover; a definitive guide filled with post-apocalyptic goodness.  It’s packed with reviews and interviews covering blockbusters to even the most obscure movies you’ve never heard of. If you haven’t got it you should definitely track it down as it’s a damn fine read.

The Good the Tough & the Deadly focuses on action movies right back to the 60’s featuring all our favourite stars like JCVD, Sly Stallone, Arnie and more. It’s also filled with reviews and interviews on classic action movies right up to the present so you’ll be hard pushed to find a more in-depth analysis of the genre. Personally, I wish I’d written it.

Seagalogy: A Study of the Ass-Kicking Films of Steven Seagal

Vern’s hilarious study of the work of Steven Seagal is a must have for fans of the sensei as he dissects of all of his movies in an always entertaining fashion. Pointing out various plot holes and lovingly poking fun at one of the more eccentric action stars Seagalogy is a riot.

Mike Fury is an action choreographer and movie journalist based in the UK and his book Life of Action interviews some great action stars like Scott Adkins, Donnie Yen, Dolph Lundgren, Tsui Hark and Andy Lau to name but a few. The interviews are in-depth and give a fascinating insight behind the scenes of the action genre. Life of Action is about to get a sequel very soon so start saving those pennies, kids.

Bey Logan is a man who needs no introduction but I’ve had this book since the 90’s and it was essentially Logan who got me interested in international action. This book has been around for a while so it isn’t exactly up to date with current Hong Kong stars but it’s still essential reading if you can track it down.

Focusing on James Cameron’s Terminator movies (the 2 good ones) Terminator Vault is hard to put down as it’s filled with anecdotes about the making of the movies and goes into detail about Cameron’s struggle in getting the first film made. It’s packed with behind the scenes pictures and interviews with the cast and crew as well as storyboards and artwork from the films.

There’s no denying that Paul Verhoeven’s RoboCop is a sci-fi classic with the perfect blend of action, satire and memorable characters. Calum Waddell doesn’t just look at the original RoboCop but goes into all of the movies as well as the TV series. This gives us interviews and behind the scenes stories but also an honest look at the films like how Irvin Kerschner simply didn’t like Nancy Allen which is why she had a smaller role in RoboCop 2. Great stuff!

Any fan of Charles Bronson needs these two books yesterday. Giving us a look into one of the most mysterious men of action of all-time the Bronson’s Loose books give us on-set details of what he was like with his co-stars and how he could actually be quite difficult to deal with. The first book is all about Bronson’s work on the Death Wish movies and we find out details about how he truly felt about them and also how there was nearly a sixth movie which we never got to see.

Bronson’s Loose Again! On the Set with Charles Bronson goes more in-depth into Charles Bronson’s life and how he behaved on set on his other movies. He was quiet and quite reserved and adored his wife Jill Ireland who he would insist had to be in so many of his movies. There are some great stories and author Paul Talbot has clearly done his research.

John Kreng’s Fight Choreography-The Art of Non-Verbal Dialogue has become the action-movie choreographer’s bible as it gives a detailed analysis into how much work goes into creating fight scenes and how to craft them. So any one who is an up and coming filmmaker would do well to read and savour every page. This is a book which will shape my opinions on future action movies and what to look for in fight scenes. Essential.

So these are some of my favourite action movie oriented books; there are of course others but would someone please do a book on the Die Hard series or Jean-Claude Van Damme? Maybe I should…