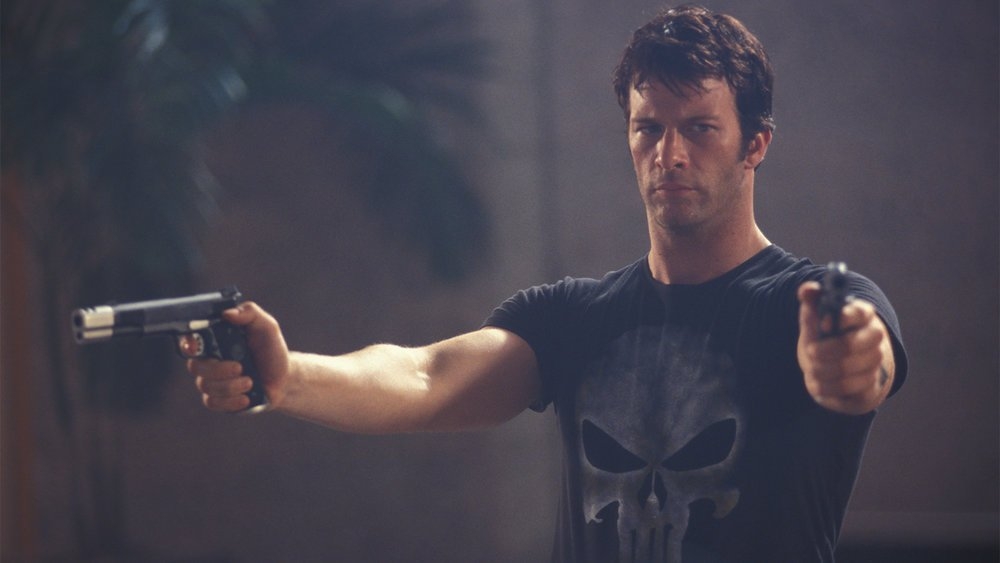 Plot: This dark action film, based on the comic book series, follows FBI agent Frank Castle (Thomas Jane) as he transforms into the vengeful Punisher after criminals murder his family, including his wife and son. Castle is gravely injured in the attack and believed to be dead by Howard Saint (John Travolta), the crime lord who ordered the hit. Following his recovery, Castle becomes a heavily armed vigilante who will stop at nothing to exact revenge on Saint and dismantle his underworld empire.

I’d never seen the Extended Cut of Thomas Jane’s Punisher movie so I thought last night I would give it a try as the DVD has been sitting on my shelf for months.

When The Punisher was first released back in 2004 it got middling reviews and I’d agree with a lot of them however Thomas Jane was great as Frank Castle and gave the character genuine soul.

As much as I usually enjoy John Travolta, I thought he was miscast as Howard Saint. He wasn’t remotely intimidating, and I couldn’t help thinking he should have been played by someone like Peter Stormare. Not sure why I pictured him but I just think it was the kind of role he excels at.

You never get the feeling that Saint is a physical threat to Castle and he is disposed of far too quickly at the end. I like a final fight scene and we never really got it which always bothered me; I will admit Saint’s death scene is rather epic and hilariously over the top but after all the build up it’s just over too soon.

My biggest issue with this iteration of The Punisher was the tone; why is there so much humour? I love Ben Foster as an actor and John Pinette was one of my favourite comedians, but their characters felt like they belonged in another movie entirely. Goofy humour has no place in a Punisher tale and that’s what always let this movie down for me. I still feel bad for Dave (Foster) who has to endure one of the most disturbing torture scenes imaginable, but I could have done without those characters.

The biggest fight scene of the entire film is between Frank and The Russian (Kevin Nash) but despite it being a decent fight it’s ruined by interspersing it with the neighbours dancing to some opera music thus taking away any sense of threat from the battle. They are nice enough characters and Rebecca Romijn is sympathetic as Joan the neighbour who tries to convince Frank that all is not lost and you can keep going if you create new memories rather than focusing on the past.

There is also an impressive supporting cast including Roy Scheider, Samantha Mathis and Will Patton (as the wonderfully sadistic henchman Quentin Glass).

I’ve always liked the score by Carlo Siliotto which isn’t what you’d expect from a Punisher movie going for an almost Western vibe but you get from the film too which at times feels like a Western with all the standoffs that occur.

I love the Harry Heck scene where he comes into the café and takes out his guitar playing that brief but haunting tune before battling it out with Frank in the next scene. It’s a great character introduction and one of my favourite sequences from the film.

The action is all incredibly slick and coherent with practical explosions and an incredibly high bodycount; there are some imaginative kills too with a highlight being when Frank sticks a knife through a goon’s chin through his mouth. I do wish there was more action though as this feels more like a character drama with a few action sequences thrown in. In that respect I prefer Punisher: War Zone as it went all out in crazy action.

There are several choice lines of dialogue like “God’s gonna sit this one out” and I particularly enjoy his speech: “I leave this as a declaration of intent, so no one will be confused. One: “Si vis pacem, para bellum.” Latin. Boot Camp Sergeant made us recite it like a prayer. “Si vis pacem, para bellum – If you want peace, prepare for war. Frank Castle is dead. He died with his family. Three: in certain extreme situations, the law is inadequate. In order to shame its inadequacy, it is necessary to act outside the law. To pursue… natural justice. This is not vengeance. Revenge is not a valid motive, it’s an emotional response. No, not vengeance. Punishment“.

The Extended Cut has an animated opening sequence which shows Frank and his friend Jimmy Weeks in Kuwait during Desert Storm; Jimmy saves Frank’s life cementing their friendship which would be explored in this longer cut. The newly inserted scenes mostly involve Jimmy and how it’s him who betrays Frank and tells Saint who he really is and where he lives. There are some nice character moments and fleshing out their friendship adds a little more depth to the story especially the confrontation in Jimmy’s apartment (below).

There are a few other minor differences in some scenes but one of the most noticeable was with the Torros who meet with Howard Saint and say how he has never invited them to his house before. This adds a little more to their relationship and it does help everything flow better regarding Jimmy.

I probably wouldn’t be able to go back to the theatrical cut now that I know about these extra scenes and character moments, but it doesn’t really improve the flaws with the film. I know we got that awesome Dirty Laundry short a few years back but I would have liked to see Thomas Jane return in a proper sequel where he gets to be full on vicious Punisher now that the origin is out of the way.

It wasn’t meant to be however, and instead we got Punisher: War Zone with Ray Stevenson then The Punisher TV series with Jon Bernthal. Either way I need more Frank Castle in my life and I hope we get a new season of the TV series (somewhere) or a new movie as soon as possible.

Overall, The Punisher: Extended Cut doesn’t fix the inherent flaws with the film as I always hated the silly humour but Thomas Jane rocks as Frank Castle and there is enough action to keep fans entertained so it’s definitely worth viewing for sheer curiosity.