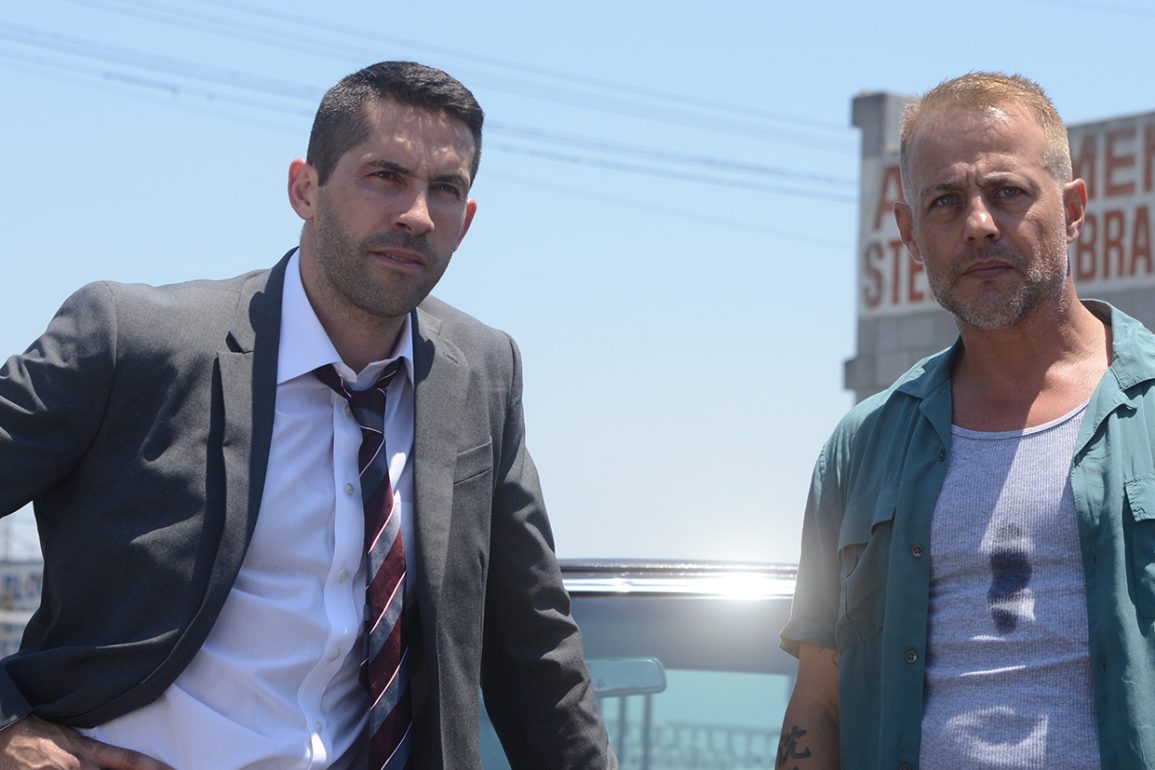 The Debt Collector is a very different beast from Accident Man but it’s never short on bone-crunching action and buddy movie banter. Adkins and Mandylor are great on screen together and director Johnson isn’t afraid to take risks when it comes to narrative.

Plot: A classically-trained martial artist goes to work as a debt collector for the mob. The job seems easy enough, until one “client” pulls him into a situation deeper than could ever be expected.

Review: Scott Adkins likes to keep himself busy having just released Accident Man a matter of weeks ago; his latest endeavor The Debt Collector has him teaming up with director Jesse Johnson once again and is something unique and unexpected.

It is at its core a buddy movie with down-on-his-luck dojo owner French (Adkins) needing money fast so he can stay in business; he speaks with his friend Mad Alex (Michael Paré) who gets him a job as a debt collector for a local enforcer played by the always magnificent Vladimir Kulich. He is teamed up with the alcoholic burn out Sue (Louis Mandylor) and the two men trade insults while having different methods of getting their job done.

The fight scenes in The Debt Collector are especially impressive (and brutal) with Adkins proving once again he is still one of the best action stars in the business. The camera work is smooth so we can see everything that is going on and there are no annoying fast edits or shaky cam. Louis Mandylor also has the moves and the action highlight is the pair of them squaring off (using various weapons) against three disgruntled goons who are in for a severe beating.

It’s not just the fight scenes that were impressive in this movie however, I thought Mandylor’s monologue about why he drinks was one of the finest acting moments of his career and was genuinely moving. Adkins has some choice lines of dialogue too and I am enjoying hearing his real accent with his recent projects.

The supporting cast is also impressive with rising star Selina Lo particularly entertaining in her brief time on screen; you can also never go wrong with Tony Todd as a sinister crimelord.

The Debt Collector has a nice sense of style to it where LA felt like a character in itself; the locations were cool and made the film feel like it took place in the same world as Jesse Johnson’s earlier film The Beautiful Ones. It was nice to see an independent movie not shot in Bulgaria or Eastern Europe; LA is (obviously) a very cinematic looking city and I love seeing it in movies. The opening dojo fight has some dappled and smoky sunlight coming through the windows and was one of my favourite scenes.

The plot has all kinds of twists and turns and is never predictable but that ending is going to be an acquired taste. I’m still trying to process it and may have to watch the movie a few more times but I’m not sure if fans will like it. Tonally it felt very different from the rest of the story and some may find it rather jarring. However, I applaud that they took a chance and weren’t afraid to do something different and aside from that I thought the movie was a blast.

Overall, The Debt Collector is another winner for the Adkins/Johnson team up but Adkins and Mandylor are also a relatable duo and have genuine chemistry on-screen. The fight scenes are brutally entertaining and there are some choice dialogue scenes; it will be interesting to see the reaction from fans on this one…

The Debt Collector will have a limited theatrical release from June 5th.