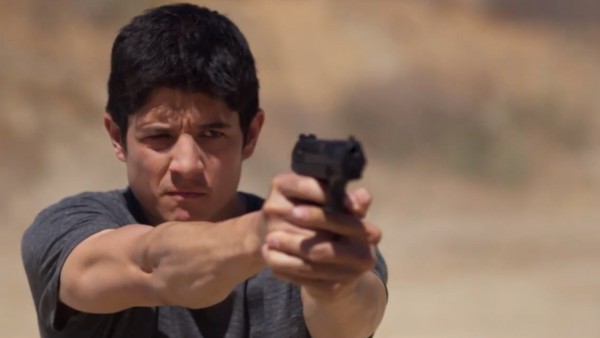 Extraction deserves to be seen by a wider audience and I hope it finds it as there are some great fight scenes and the cast are all in top form.

Plot: EXTRACTION follows Mercy, a U.S. Black Ops team member & the only survivor of a botched prisoner extraction mission. To save the lives of thousands of innocent civilians, he has to catch a terrorist arms-dealer with the help of a criminal—who may have information about a pending large-scale attack.

Review: It’s The Raid meets 24 in this rather excellent action thriller; Extraction has arguably the best fight scenes of 2013 and should be at the top of any action fans must see list for this year.

Extraction marks the first feature film by the website Crackle and the film is written and directed by Tony Giglio (Chaos). The fight scenes are pretty jaw dropping and great to see a modern American director who actually can shoot a fight scene. There is no shaky cam or poor editing, but just genuinely thrilling action scenes and breathtaking martial arts.

I will always watch Danny Glover in a movie and it’s great to see him back in the genre that he’s most famous for. The supporting cast in general are excellent with Vinnie Jones playing one of his scariest villains. I don’t think I could ever see him as a good guy because he just comes off threatening no matter what. He has such an intimidating presence on screen and this is one of his best roles. With this and Blood of Redemption, he’s proving himself quite the man of action these days.

We also get to see Sam from Lord of the Rings (Sean Astin) in a very different role and I’d like to see him do more of these types of movies.

John Foo is a name you should remember as he has “martial arts star” written all over him. His fight scenes in this movie are fantastic but he also has some great buddy banter with Falk Hentschel (who looks remarkably like Chris Martin from Coldplay, I might add).

The music was awesome and there is a nice nod to Die Hard with the inclusion of Ode to Joy during one of the action scenes.

I did find that it was a bit too similar to The Raid and Dredd in places, using the tannoy announcement scene that both of those movies used. Also I don’t know why but as soon as they said there was a mole, I knew exactly who it was going to be, but I don’t want to spoil it.

I found Crackle rather annoying to use though and had to try several browsers before being able to watch the movie without it stopping every few minutes. This is why I won’t be getting rid of my Blu Ray or DVD collection any time soon.

It’s left open for a potential sequel or even a fully fledged franchise and I have to say that you can count me in. The character of Mercy is really likable and the added bonus of Danny Glover only sweetens the deal.

Overall, Extraction deserves to be seen by a wider audience and I hope it finds it as there are some great fight scenes and the cast are all in top form.