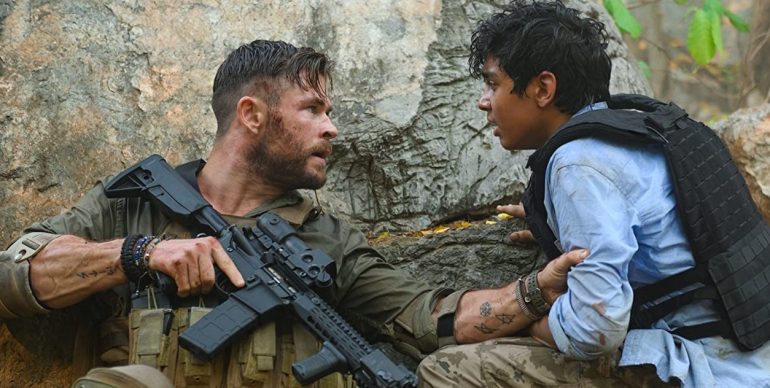 Extraction may be flawed but it might end up being one of the best action movies of the year (mostly due to lack of competition) as there are some genuinely explosive set-pieces and a sense of scale we rarely see in R-rated action movies these days.

Plot: Tyler Rake, a fearless black market mercenary, embarks on the most deadly extraction of his career when he’s enlisted to rescue the kidnapped son of an imprisoned international crime lord.

Review: Based on the graphic novel Ciudad, Extraction stars Chris Hemsworth as a mercenary tasked with rescuing a drug dealer’s kid in India. That’s pretty much all there is to the story and there are no major surprises, but it has some of the best action scenes you’ll see this year… especially since there are like 3 films out for the next few months.

Netflix films can be hit or miss and I would put Extraction into the mostly hit category mostly due to how slick the action is. I’m not really sure I buy Hemsworth as an action guy, but I do like him on screen; it’s a shame there isn’t that much to his character. From the trailer you can see he lost his son a few years back so naturally when he goes to rescue the boy he becomes the surrogate father to him as he tries to keep him alive.

A rival drug lord called Asif (Priyanshu Painyuli) is responsible for the kidnapping of Ovi (Rudhraksh Jaiswal) and he is an especially nasty villain who at one point has one of his henchmen throw children off a rooftop to get information. He deserves a more satisfying death than he gets but Painyuli portrays him with suitable ruthlessness.

Ovi is immediately sympathetic and a genuinely good kid who is merely a victim of the life his father chose. Maybe I wasn’t paying attention but aside from money I never really understood why Asif wanted to kidnap Ovi as his rival (Ovi’s dad) is in jail and not a major threat but if he didn’t then it would have been a short movie.

The performances by the entire cast are believable and although he’s a bit one note Chris Hemsworth’s character Tyler Rake (amazing name) is an appealing protagonist even when tempted by his friend to abandon the kid and just take the money.

It moves at a swift pace giving characters time to breathe and to build the relationship between Tyler and Ovi so we do care about what happens to them, especially Ovi.

The final 40 minutes is one big action set-piece which I think may end up being one of the year’s best and a bodycount surely in the hundreds.

I’m not sure I would ever sit through it again but there is enough violence and satisfying R-rated kills to make it a solid one-time watch. I need to mention that at one point someone gets killed with a pitchfork which makes the movie worth watching for that alone.

I do miss action movies with snappy and memorable dialogue and larger than life characters though; I know I say that a lot but I could barely quote you a single line of dialogue from Extraction aside from the “Goonies from Hell” which admittedly was the best one of the movie.

Overall, Extraction is a balls to the wall action extravaganza with some impressive set-pieces and R-rated action. Hemsworth makes for a strong lead and it’s refreshing to see a kid who is never annoying and instantly appealing so you might as well give it a viewing this weekend. After all, what the Hell else is there to do?