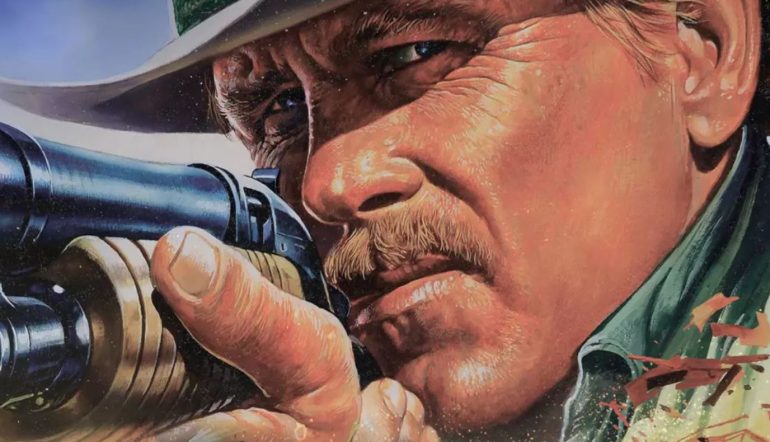 Extreme Prejudice is one of my all-time favourite movies with one of the best casts of the 80’s and plenty of explosive action scenes. This Blu-ray from Vetstron is fantastic packed with special features that will provide hours of entertainment.

Plot: Jack Benteen (Nick Nolte) is a Texas Ranger who has taken a very different path than his childhood buddy, Cash Bailey (Powers Boothe), a ruthless drug lord. While Benteen and Bailey are on opposites sides of the law, they share a common interest in the lovely Sarita Cisneros (Maria Conchita Alonso), who has been involved with both men. The tension between Benteen and Bailey gets further heightened when the lawman plays a key role in a major narcotics bust, resulting in a fierce showdown.

Review: Walter Hill is one of the most under-appreciated directors in the business; he has some classic movies under his belt and Extreme Prejudice is one of his absolute best.

It has one of the best casts of the 80’s including Nick Nolte at his most stoically badass and Powers Boothe as a cold-blooded antagonist who always refers to himself in the third person. The supporting cast includes Michael Ironside, Clancy Brown, Rip Torn and William Forsythe; it’s almost an Expendables type cast of 80’s villains all together. William Forsythe plays crazy with ease but his character here isn’t as unhinged as he first seems showing he has a code of honour and he believes what he is doing is right.

Nolte’s character Jack Benteen is tough as nails and obsessed with bringing his childhood friend Cash Bailey (Boothe) to justice; due to their history it creates an interesting dynamic as they grew up together but went their separate ways in later life. Jack also has trouble with his lady Sarita (Maria Conchita Alonso) who was with Cash previously so there is always that underlying resentment.

It never gets sentimental as everyone in this movie is focused on their respective missions with little time for romance; this keeps the pacing tight while still giving us enough characterization to care about what’s going on.

Every performance is fantastic and the script has some choice dialogue; the film still stands up today really well too with a classic music score from the late, great Jerry Goldsmith.

The story has a few twists and like most Walter Hill films it feels almost like a modern Western with the final 15 minutes climaxing with a hail of gunfire and bloodshed reminiscent of The Wild Bunch. There are regular action scenes and we get some impressive explosions and shoot-outs with my personal favourite being the gas station sequence.

The Blu-ray from Vestron has been well remastered although there is still some grain in places but as the film is from 1987 then it’s understandable. It’s still the best the film has ever looked or sounded and the special features just make this a must-have. There is an hour long interview with Walter Hill who talks about working with Powers Boothe and Rip Torn who had passed away before this Blu-ray was released. Hill gives one of my favourite ever interviews as he goes into detail about working with Sam Peckinpah on The Getaway as well as his thoughts on current movies. There is also a great interview with Michael Ironside who talks about how this was his first big picture after working in Canada for a few years and he talks about how Walter Hill encouraged him.

Check out the full list of special features below.

Overall, Extreme Prejudice remains a classic of the genre and one of Walter Hill’s best movies; it has one of the greatest action movie casts of the 80s with faultless performances all round. The film has never looked or sounded better and there is a wealth of special features here making this an essential purchase.