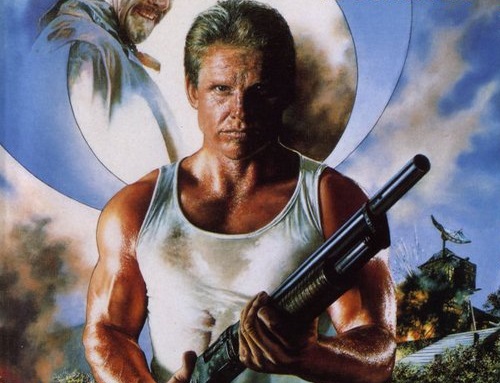 I just loved this film; it’s everything I love about action movies with great characters, evil villains and a final 20 minutes of kick ass action.

Plot: Gary Busey plays Buck, a former Vietnam veteran/ex-con recently released from the state prison. He returns to the small Midwest town where he grew up only to discover the place overrun by a large motorcycle gang bent on causing trouble. When the bikers murder his wife and traumatize his young daughter, Busey, with the help from a fellow Vietnam vet, as well as his former cell-mate, a drug kingpin living in Miami, Buck arms himself to the teeth and wages a war against the motorcyclists to destroy them once and for all.

Review: If you don’t like movies where cars (or pick-ups in this case) have machine guns and missiles than frankly, you have something wrong with you. The last 20 minutes of this movie has exactly that and is some of the most satisfying action goodness I’ve seen for a while.

The acting is all surprisingly good with Gary Busey playing a hero for a change rather than the cackling maniac he usually plays. Yaphet Kotto is always awesome and I was totally expecting him to die because he was “2 days from retirement”, but there was the pleasant surprise of him surviving.

The Sheriff was a total bastard and the main bad guy “Blade” was the kinda villain that during the final fight you’re shouting “DIE YOU PIECE OF SHIT!” at the screen. I love when movies do that; you’re totally emotionally involved in the story.

There isn’t constant action and the only big set piece is at the end, but it’s so awesome that the rest of the film actually builds up characters and story. It also has one of the best decapitations of all time.

The music is 80s awesomeness but the best thing is the use of Eye of the Tiger from Rocky 3 but also Living in America by James Brown from Rocky 4; so the filmmakers were obviously big Rocky fans (and who wouldn’t be?)

It isn’t the kind of film with tons of one-liners, it’s actually got a serious tone to it and for the most part it works really well.

Overall, I just loved this film; it’s everything I love about action movies with great characters, evil villains and a final 20 minutes of kick ass action.