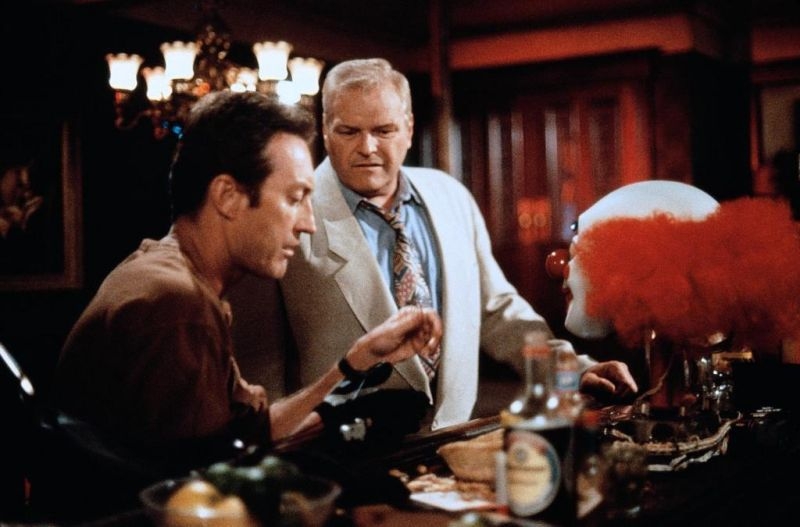 It must be over 20 years since I last watched the F/X films; I saw them pop up on Amazon Prime and thought it was about damn time I did a little write up but rather than just review each of them let’s take a look and see which is the superior movie.

Plot: Rollie Tyler (Bryan Brown) is a special-effects expert for low-budget Hollywood movies. As gangster Nicholas DeFranco (Jerry Orbach) prepares to testify in court against his former bosses, FBI agents, fearing Nicholas will be killed by the mob before he can take the stand, decide to fake his assassination. The agents hire Rollie to use his special-effects skills to make the murder look believable. Leo McCarthy (Brian Dennehy), a detective, steps in to investigate the murder.

I loved F/X when I was younger as I thought the idea of a special effects guru using tricks of the trade to take down the people who set him up was very clever and after watching it recently it still holds up. Bryan Brown could play characters who would be easy to like but also rather intense and Rollie Tyler is both. Apparently Harrison Ford and Mel Gibson were both considered for the role but I think Brown really made it his own with Rollie becoming one of his most iconic characters.

Then we’ve got the late great Brian Dennehy well cast as grizzled cop Leo who thinks the “murder” of mob boss DeFranco isn’t all it seems despite what his superiors tell him.

This is such a well told story with every scene necessary to move the plot forward and there isn’t a single moment that could be cut. It’s a taut hour and 45 minutes with some fights, chases and explosions to keep things ticking along nicely.

I totally forgot that Dodi Fayed produced this movie; in case this was before your time he was a film producer but he was also dating Prince Diana when both of them were killed back in 1997.

I think the highlight for me is the chase with Rollie and his friend Andy (Martha Gehman) as they drive their FX truck through New York city after setting off explosions at an impound lot. It’s incredibly well executed (even if Gehman doesn’t give the best performance ever) and one of my favourite scenes.

The score by Bill Conti is orchestral and exciting all adding to the action scenes to make this hold up as an action gem.

Overall, F/X is a massively entertaining action thriller with memorable characters from Dennehy and Brown; it moves at a fast pace and has plenty of exciting action. So let’s take a look at part 2…

Plot: Former movie special effects expert Rollie Tyler (Bryan Brown) has now become a maker of elaborate toys. When a police officer asks him to use his special effects skills to help catch an elusive killer, he teams up with old friend and private investigator Leo McCarthy (Brian Dennehy). Using a combination of old-fashioned detective work and movie magic, the two uncover a plot involving stolen gold and corrupt cops, while evading a mysterious assassin.

This sequel came out 5 years after the first F/X (which was quite a lengthy break for back then) and although there is still a lot to enjoy, I find there just isn’t enough action or excitement. At some points Rollie doesn’t get a lot to do with Leo really becoming the primary protagonist; there are various times where Leo is out investigating while Rollie is literally sitting in the bar waiting for him to come back.

The first movie had a lot more action with that awesome car chase for a start but there isn’t anything all that thrilling in this one aside from the sequence in the supermarket and the desperate fight between Rollie and Rado (John Walsh) as Rollie uses everything he can to survive… including his robot clown Blue.

Also, Am I the only person that finds Blue the Clown absolutely bloody terrifying? How does Rollie sleep knowing that thing is in his house!?!? When I saw this as a kid, I found him freaky but as an adult it’s even worse!

Spoilers ensue! I do like that we get to see more of the duo working together as they have good chemistry together and I still think it’s sad that literally a few minutes after Leo finally gets together with his girl she ends up getting killed. Action movies are murder on relationships. At least Rachel Ticotin survives it and I liked how in this one Rollie has mellowed a little and is less intense than he was in the first movie.

Lalo Schifrin scores this one and I prefer the music in this entry with its slinky saxophone giving a seedy vibe but then we get some awesome electric guitars during the action scenes.

There are a few choice lines of dialogue with Dennehy having the best ones; I love his way with the ladies in these movies which provides several laughs.

Overall, F/X 2 isn’t quite as action-packed as the first movie but Dennehy and Brown make for a fun double act and it certainly has its moments.

Well, in case you hadn’t guessed the first F/X is easily the winner for me as the story has more tension to it and it has more exciting action set-pieces. Part 2 is entertaining enough but it lacks the rewatchability of the original.