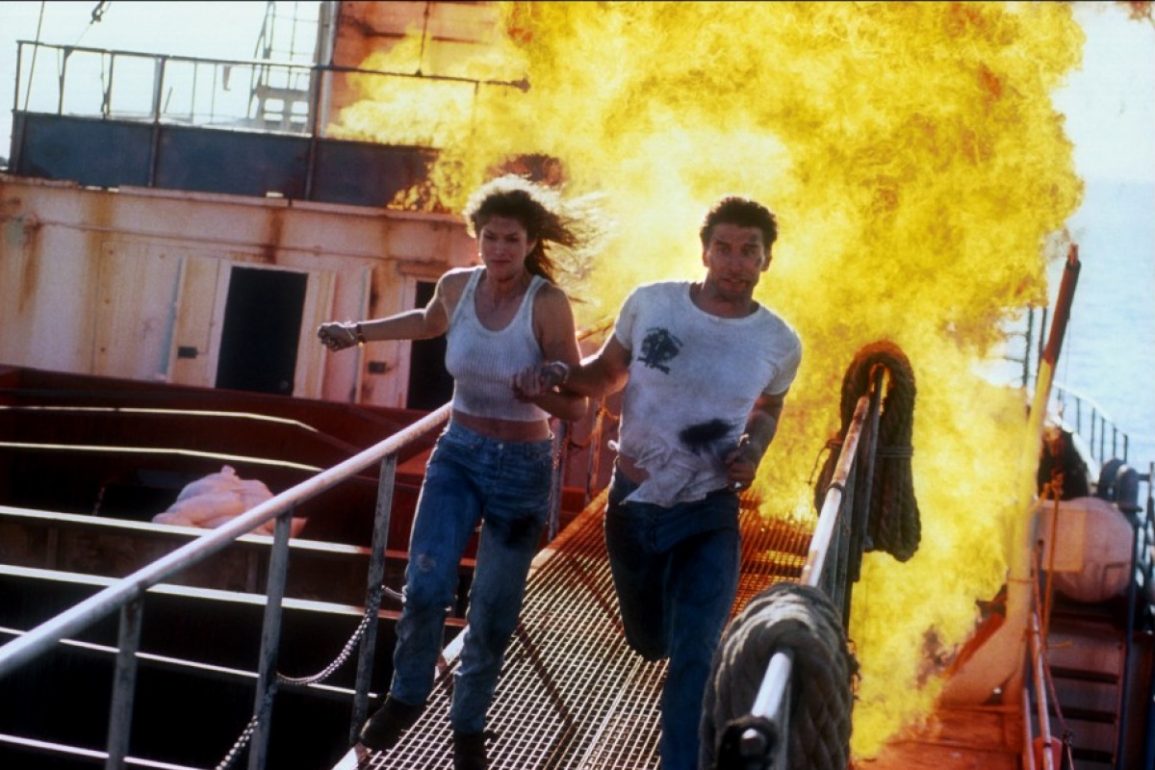 Fair Game isn’t a patch on Cobra but it has some enjoyable action beats and Cindy Crawford isn’t hard to look at; Mark Mancina’s score is the highlight and you can never go wrong with Steven Berkoff as a villain.

Plot: When Kate McQuean, a family lawyer, finds herself as the target of ex-KGB agents, it is up to Max Kirkpatrik, a Miami detective, to keep them both alive.

Review: Like Sylvester Stallone’s Cobra, Fair Game is based on the novel Fair Game by Paula Gosling although neither is a direct adaptation as the plot for the novel is as follows: “Clare Randell is a harmless San Francisco ad executive who makes the mistake of interrupting an international hitman in the course of his professional duties. She becomes his next target, and is put under the protection of the icy Mike Malchek.”

In this version Clare Randell is now lawyer Kate McQuean (Cindy Crawford) who gets in over her head with some Russian bad guys and it’s up to cop Max Krikpatrick (William Baldwin) to save her.

Fair Game the movie was generally dumped on when it came out (12% on Rotten Tomatoes) and it’s easy to see why; Cindy Crawford made her big screen debut with it and she doesn’t make the best impression. She’s basically there just to look pretty and you could have a drinking game every time there is a gratuitous shower scene. She never convinces as (“harmless?”) lawyer Kate McQuean and she probably could have had a few more acting classes before taking on this role. Mind you, she didn’t have much to work with as the script isn’t the greatest and it’s the kind of movie you’ll forget about 10 minutes after viewing.

William Baldwin does the best he can as her protector Det. Max Kirkpatrick even if he could never be a patch on Marion Cobretti… after all who could? Max can’t seem to find anyone he can trust so the two end up being chased around the country by Col. Ilya Pavel Kazak (Steven Berkoff) and his goons who always seem to be one step ahead.

By the time the end credits roll there is no scenery left as Berkoff has chewed it all; he hams it up hilariously but always makes for a fun villain.

There is an impressive supporting cast that includes Christopher McDonald, Miguel Sandoval and Hank Stone. Salma Hayek even gets a brief role as the crazy and annoying ex-girlfriend of Max who only shows up for a couple of scenes.

Fair Game also has the great Jenette Goldstein who plays one of the bad guys and she can be such a chameleon disappearing into her roles where you sometimes don’t even recognise it’s her. She kicks William Baldwin’s ass for the most part during their climactic fight and she never fails to convince with her badassery.

My favourite aspect of the entire movie is Mark Mancina’s score which is very similar to his work on Speed with awesome percussion and twanging guitars. I wish he did the music to more movies as Speed is one of my all-time favourite scores.

The action in Fair Game is well done with lots of real explosions and impressive stunt work which is why this gets more than 2 stars. It’s 90 minutes of fast paced escapist nonsense making it the perfect distraction from reality.

Overall, Fair Game isn’t exactly classic action cinema but its brisk pace and regular action scenes make it worth a watch. Too bad the script and some of the performances weren’t a little better – you could just watch Cobra again instead…