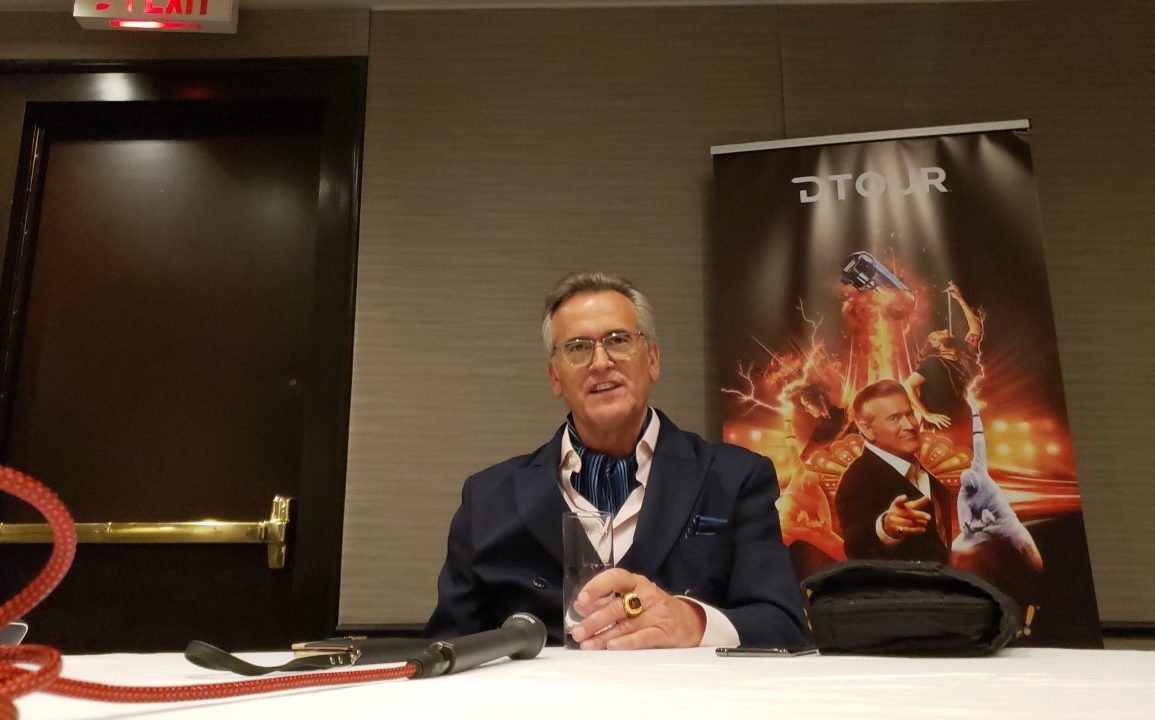 I’m at the Fan Expo in Toronto this weekend and was invited to join a roundtable interview with Hollywood legend Bruce Campbell to talk about his new show Ripley’s Believe it or Not but we also discussed Burn Notice and Bruce also confirmed that he is done with the Evil Dead.

Would you ever like to travel in the future with the show?

I travel enough (laughs); the last few years it would be like 35-40 cities. I’m only at 25 cities so far this year; I’m getting off easy this year.

You’ve mentioned tone before; have they ever run ideas past you that you’ve turned down?

No, cos as long as it’s real and that is the most amazing thing about Ripley’s; it’s not faked. So we move kind of beyond the reality show aspect. Reality shows are manipulated; every single aspect of The Bachelor. Every aspect is manipulated no matter what you think. Producers are behind the scenes pulling the strings, figuring out who would be most entertaining to put together. We don’t do that. Everything you see is completely real; if a guy says he can cut an Oreo cookie in half in the middle of the air sideways he can do it. We have the Guinness World Records folks doing stuff too as part of it so there’s a lot to look at.

What do you want audiences to take from the show?

Just a positive experience because sometimes you can see the normal side of people through extreme activity in a weird sort of way. It doesn’t really make sense but mostly a positive experience; the “ick” factor is not that high. We don’t want to turn people off; that’s not the idea but there are people doing things that are both amazing and repulsive at the same time so you’re going to have to deal with that too.

Granny’s not going to want to watch everything and little Billy’s not going to watch everything but tough that’s half the fun (laughs). There’s no reason for us to flinch away from it because it is real. A guy wanted to become a parrot; so, he did everything he physically possibly could to become a parrot. So, what would that entail? Like surgery, tattoos on his eyes, removing your ears and tattooing your face with the patterns of a feather. He wanted to fly so he rigged up some crazy fly rigs. So, amazing? Yes. Horrifying? Potentially but some stories are a two-edge sword yet at the same time you celebrate that person’s independence – “I wanna be a parrot! Here I go!” Fly little bird (laughs). You can be whatever you want when you grow up… I wanna be a parrot. Some guys wanna be a fireman (laughs).

Hey, it’s about time; people are starting to get nostalgic; all you gotta do is wait the right amount of time which is right about now. Especially when the world’s going to shit everyone wants to find the show’s that make them feel comfortable; they want that meatloaf sandwich that made them feel good reminding you of when everything was safe.

One of the other interviewers asked if Bruce would like to return with one of his previous characters:

I never sort of play that game but I could do this Western again The adventures of Brisco County Jr.; “Brisco Rides Again”. I could do that but Sam Axe and Burn Notice would also be good. There’s still d-bag’s in the world that need to be taken down. So maybe he needs to come out of retirement; yeah, there’s stories in there. These days with the structure of television everything is going that way anyway; everything is always a limited series but that’s how you get say Kirsten Dunst for Fargo. 1 year obligation; it’s not a 7 year contract. All TV contracts are always 7 years and actors really start to bristle at that after a while. You can’t get big shot actors and they’re like “7 years? Are you kidding me? Not a chance!” So, it’s kind of interesting how the format of TV shows works professionally and that’s how you can get someone like Kirsten Dunst and she’ll go “great, I can do a whole season of a character study. So, for an actor it’s awesome; it’s the best part of Ash vs. Evil Dead – going back with experience now as an actor and bringing the Ash character forward now and try and mess with him. It’s a very appealing aspect of it. Never say never regarding remakes. Everybody’s got remake fever, but they always have. The first movie they ever made was The Great Train Robbery; the cowboy pointing the pistol at the camera.

It was also the first ever action movie…

That’s right and what’s the second movie? It’s a sequel to The Great Train Robbery; that didn’t take long. That’s how Hollywood works; they’re gonna Marvel themselves into the ground.

Is it harder to get projects greenlit these days?

I’m gonna find out (laughs); all the executives are 25 so it could be easy or it could be impossible. They might go “thanks gramps; nice meeting with you” but it’s time to find out.

Is there any character you’ve played that you really identified with and miss playing?

Most of ‘em. Ash from Evil Dead I’m done with now. I’ve done that and got that box checked cos I think I played it enough. I left everything on the table but usually when I’m done with a character, I’m happy to walk away. Burn Notice, same thing. That’s a long run – 111 episodes, that’s enough. So we’ll see… could be here next year touting the Burn Notice movie.

We’ll be happily waiting for that…