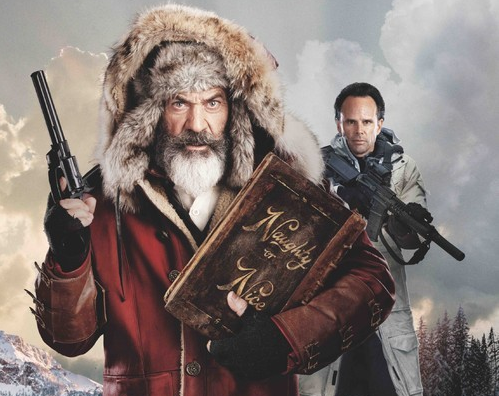 Fatman is everything you could want from a Mel Gibson film with black humour and a high bodycount and Walton Goggins on sparkling form making this one movie you’ll want in your stocking this Christmas.

Plot: To save his declining business, Chris Cringle (Mel Gibson), also known as Santa Claus, is forced into a partnership with the U.S. military. Making matters worse, Chris gets locked into a  deadly battle of wits against a highly skilled assassin (Walton Goggins), hired by a precocious 12-year-old after receiving a lump of coal in his stocking. ‘Tis the season for Fatman to get even, in the action- dark comedy that keeps on giving.

Review: I had a feeling from the trailer to Fatman that we might have ourselves a new Christmas classic on our hands and I was correct; Fatman stars Mel Gibson as Chris Cringle AKA Santa Claus and Walton Goggins as an assassin known as Skinny Man charged with taking down Santa by a rich brat called Billy (a wonderfully hateful Chance Hurstfield).

Although the first half is mostly build up it is packed with black humour and guarantees Fatman is going to be a regular addition to my Christmas watch list.

Mel Gibson has never given a bad performance and I foresee his iteration of Chris Cringle becoming iconic in the coming years; he’s a cynical Santa who is a product of our times and has generally lost faith in mankind as all he sees are kids being naughty. As great as Gibson is however, this movie belongs to Walton Goggins who has the best lines with pitch perfect deadpan delivery. He has his own reasons for wanting Cringle dead and a lifelong vendetta which I won’t go into here.

Despite being an R rated action movie the familiar Christmas movie themes are all there like humanity losing faith in Santa and he has also lost faith in them. Chris is kept going by his supportive wife Ruth (Marianne Jean-Baptiste) who never loses her belief in him. It sort of feels like Miracle on 34th Street with a bodycount.

As I mentioned above the first half of the movie is establishing the characters rather than constant action but Skinny Man takes out a few people along the way and it’s setting the stage for the ultimate showdown at the end between Chris and the hitman. Every action scene is earned so rather than a constant barrage of noise and explosions we get some social commentary making it a timely tale for modern America. As the director stated “Chris and Ruth are the old-world becoming obsolete and out of touch, relying on a time when hard work and strong moral values were the recipe for success. Billy and the Skinny Man are the new wave. They bully competitors and have no problem lying, cheating, and even killing to get what they want. When these worlds collide, there will be a reckoning”.

The final act is profoundly satisfying with Goggins’ assassin assaulting Santa’s village and it’s all done with a straight face; it shouldn’t work but it totally does and by the time the end credits started rolling I wanted to watch it all over again.

Overall, it may take a little while to get going but a new Christmas action classic is born with Fatman and I see it becoming a cult favourite in the future; Gibson and Goggins both nail their parts to perfection and the tone is spot on throughout giving us an instantly rewatchable gem.