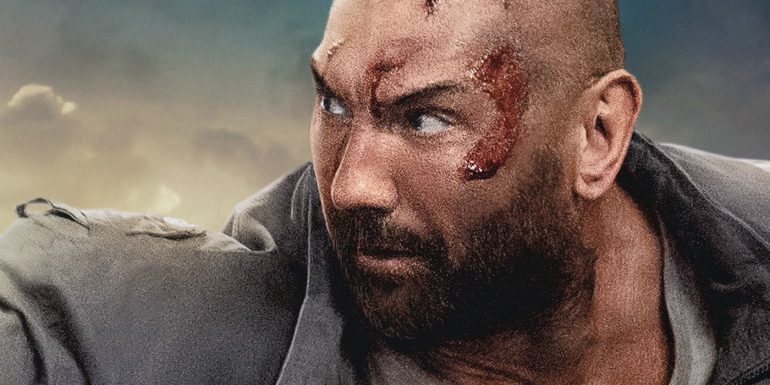 Final Score really lifts a lot from Sudden Death but still manages to be action-packed with an entertaining villain and likable hero in Dave Bautista.

Plot: A former soldier wages a one-man war against deadly terrorists who hold his niece hostage at a soccer game.

Review: When I first saw a trailer to Final Score I (like everyone else) thought “Wow! That looks EXACTLY like Sudden Death” but I figured if you’re going to rip off a movie then why not that?

After watching Final Score I can confirm that it is practically the same movie as Sudden Death and even has similar set-pieces. You know how at the end of Sudden Death you have that awesome scene with Van Damme swinging from the lights? Well in this Dave Bautista swings from a banner over the stadium. There is also a fight scene in a kitchen featuring a deep fat fryer but sadly no penguin mascot is beaten up.

If you can get over the blatant similarities then you’ll have a blast with Final Score as it’s slickly made and I really like Bautista on screen; frankly he takes more interesting roles than The Rock and is arguably the better actor; he’s very good at looking haunted which is exactly what is required for his character in this movie.

It wastes no time getting going with the action kicking off immediately and it never really lets up for the entire run time. We get multiple fight scenes and I think the highlight is Bautista vs. Martyn Ford (Boyka: Undisputed) whose career has gone from strength to strength since.

Ray Stevenson is on villain duties and never disappoints; you almost even respect him because he is trying to achieve a political goal rather than just kill lots of people for no reason.

Pierce Brosnan doesn’t have much to do but adds a nice bit of star power and does a pretty decent Eastern European accent too.

Bautista’s niece is rather annoying and personally I’d have left her behind with the terrorists and gone to the pub so it’s a good thing I’m not an action hero. There is the obligatory cowardly sidekick called Faisal who becomes a total hero as the story progresses and also has the funniest scene of the entire movie.

Overall, Final Score is definitely a better film than Skyscraper and despite being a bit too similar to Sudden Death it’s an entertaining rollercoaster ride with plenty of R rated action and Dave Bautista long since proven he has the chops to be an action star. Worth a rental at least.