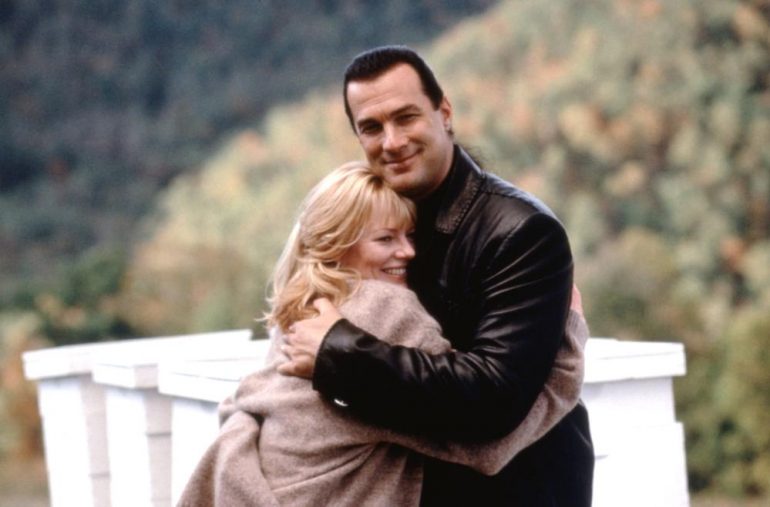 Plot: When an EPA representative is discovered dead in a small Midwestern town, government agent Jack Taggart (Steven Seagal) goes undercover to check things out. He finds that local coal mogul Orin Hanner Sr. (Kris Kristofferson) is cutting financial corners by disposing of hazardous waste wherever he pleases and that local kids are falling ill because of this recklessness. Taggart then works to stop the shady activity and save the town, but Hanner and his thugs soon grow suspicious of him.

Review: One of the reasons I always enjoy a Steven Seagal film is the way he talks shit to the villains; he loves to just annoy them, slap them and generally humiliate them. The fact he sometimes tends to do that to his on-screen friends too may not be the best idea but in Fire Down Below he’s actually quite friendly to most people.

The bad guys get what they deserve of course but our Steve actually puts the moves on Marg Helgenberger despite protestations from her pervert brother played by Stephen Lang. So we get a bit of a love story which isn’t something we see too often in a Seagal flick (aside from maybe Kelly LeBrock sighing wistfully “Mason Storm” in Hard to Kill).

There’s more to the story of course but this is essentially On Deadly Ground 2, except with less interesting action. In fact Fire Down Below is actually pretty boring. Rather than Steven slapping everyone in sight, we get things like characterisation and plot development; what kind of sorcery is that?

We do get some fun redneck villains and Kris Kristofferson is clearly enjoying himself hurling abuse at his incompetent son.

So there’s a lot of investigating by Steve as he questions the townsfolk about some illegal toxic waste dumping but some of the hicks don’t like it and he has to beat them up while mocking their puniness.

Although it’s quite slow to get going there are few things more satisfying than Steven throwing people around like their made of Play Doh and not even getting a hair out of place on his ponytail. The action is pretty low key with a few fight scenes, an exploding mine and a car chase. Nothing really spectacular or memorable but Seagal does get props for trying something mildly different from the norm. He is thankfully still invincible, casually brutal and a bullying ass to the bad guys so that’s always a plus.

I really liked the score by Nick Glennie Smith which is all twanging guitars and just the type of music you want in an old-school action movie. We also get to hear Seagal sing and see him play the guitar… which is interesting and so is his dress sense as he sports some bizarre looking jackets but nothing quite as epic as what he wore in On Deadly Ground.