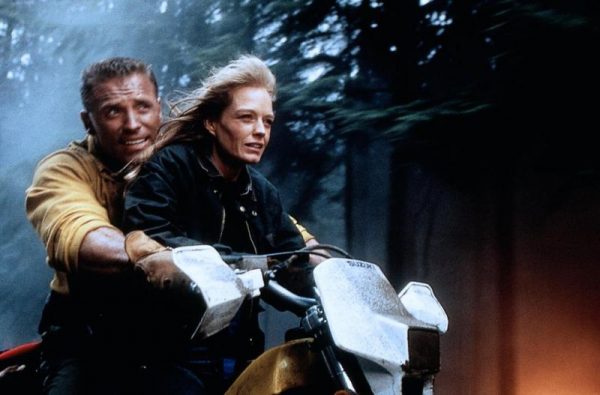 Firestorm is a good old-fashioned and straightforward actioner with some impressive set-pieces and a likable cast.

Plot: A firefighter (Howie Long) and his mentor (Scott Glenn) encounter an escaped convict (William Forsythe) and his cohorts in a blazing forest.

Review: Howie Long was another footballer who attempted to be the next action hero but despite a few attempts he never really broke through with Broken Arrow and Firestorm being his standout actioners. I liked him on-screen and he had a natural likability especially in this movie as Jesse, a true blue hero smokejumper who has to face off against some escaped convicts led by the always brilliant William Forsythe.

Forsythe’s villain Earl Shaye is everything a bad guy should be; ruthless, nasty and wiling to kill anyone who gets in his way. All he wants is his money and he can only get to it with the help of his crew (which includes a young Barry Pepper and Vladimir Kulich) but the farther they go on the deader they all become as Earl just likes killing people and has a problem with sharing.

I love movies set in the wilderness where man has to face the elements as well as human adversaries; this time it’s a huge forest fire and Jesse has to rescue a trapped ornithologist called Jennifer (played by Suzy Amis) who has been take hostage by Earl. I liked how she wasn’t just waiting to be saved though and was believably tough without feeling forced like so many characters do today.

Scott Glenn has a supporting role but doesn’t really get to do much but he always makes any movie watchable as the gruff old-school smokejumper who is Jesse’s mentor and friend.

This movie has lashings of cheese however, and there are a few moments you just wouldn’t get away with in today’s modern cynical cinema but that’s kind of why I like it. There’s a simplicity to it all which keeps you engaged; it also has some spectacular action scenes with the firestorm scenes particularly impressive. There are a couple of blue screen moments but nothing too distracting and it generally holds up well.

I also must tip my hat for William Forsythe’s incredibly painful looking bad guy death; I gotta say though at one point Jesse throws an axe at him which hits him in the chest… pretty sure that would kill him but this being the 90’s the bad guy can never die once so he has to come back one last time.

Overall, Firestorm is a good old-fashioned and straightforward actioner with some impressive set-pieces and a likable cast. It is cheesy as Hell in parts but I enjoy it for what it is.