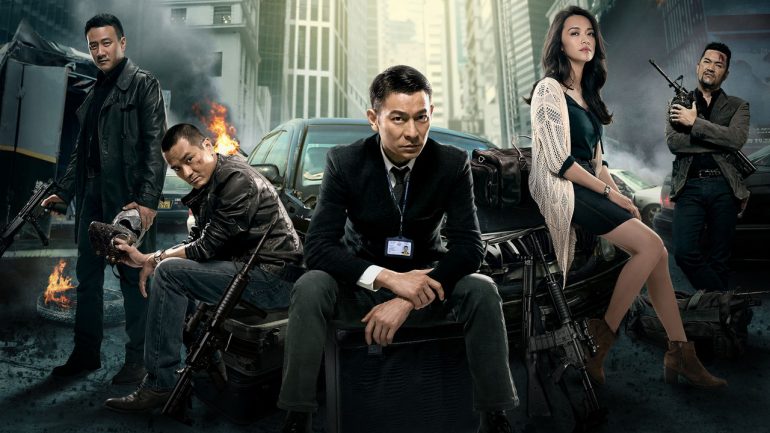 Firestorm is a spectacular action movie with some fantastic action set-pieces and interesting characters. It’s not all that original and there is some obvious CG but the sheer inventiveness on display is what really puts it on my top movies of the year list.

Plot: A storm is heading to the city, and with it comes another occurrence so destructive, it vows to bring down everything it touches. A crew of seasoned criminals led by the notorious Nam (Hu Jun), armed with high-powered weapons, pulls off another smooth and violent armored car heist in broad daylight in a crowded street. Whoever tries to get in their way, they will show no mercy. This puts the police force to shame and humiliation. A hardboiled senior police inspector Lui (Andy Lau), hot on the trails of Nam and his tight crew, determines to put an end to this madness that causes the lives of innocent people. But he soon comes face to face with the cruel reality that the usual police tactics are too futile to send these armed thieves behind bars. Extreme crime requires extreme justice, even if it means crossing his moral line. Tou (Lam Ka Tung), an ex-con desperate to leave his criminal past behind, volunteers to be Lui’s snitch in exchange for a fresh start with her girlfriend Bing (Yao Chen). But little does he know what hellish situation he’s getting himself into.

Review: I do like when a film comes out of nowhere and ends up being one of the best action movies of the year and that’s very much the case with Andy Lau’s Firestorm.

It feels slightly influenced by classic John Woo films with random pigeons flying around during action scenes but also with characters that aren’t black and white. Andy Lau is fantastic as inspector Lui; a man who will stop at nothing to bring these criminals to justice.

When he begins bending the rules, things quickly go pear-shaped and a man who started out as a great cop finds he is becoming no better than the men he is after.

It’s not really anything we haven’t seen before but the performances by the entire cast and the jaw-dropping action scenes are what elevate it to something special.

It certainly has elements of Heat, especially in terms of action; the climactic shoot-out on the street is incredible and despite some of it looking CG, it’s still better than a lot of modern Hollywood blockbusters.

The relationships between the characters are explored in depth and the most complex character is Tao (Ka Tung Lam); a man recently released from prison that just can’t help getting into trouble. His girlfriend doesn’t approve and wants him to leave the old life behind, but it’s not that easy.

Although it’s only a small role, I really enjoyed Michael Wong as the Chief Superintendent; you’re expecting him to be the shouty police chief from 80’s action movies but instead he is supportive and calm. He’s one of the most genuinely decent characters in the film and stuck with me after watching.

The story is surprisingly moving in places; especially the relationship between the informant and his daughter who is autistic. It’s also not without its shocking moments and takes risks you wouldn’t see in a mainstream American film.

It’s a rare occasion that I am blown away by how inventive an action scene is but the rooftop explosion and fight scene were stunningly executed.

There are some great hand-to-hand fight scenes but the action is mostly explosions and gunfire… works for me! It doesn’t skimp on bloodshed either, especially with the finale. In one scene a cop has his leg blown in half which we see in fabulously graphic detail.

Overall, Firestorm is a spectacular action movie with some fantastic action set-pieces and interesting characters. It’s not all that original and there is some obvious CG but the sheer inventiveness on display is what really puts it on my top movies of the year list.