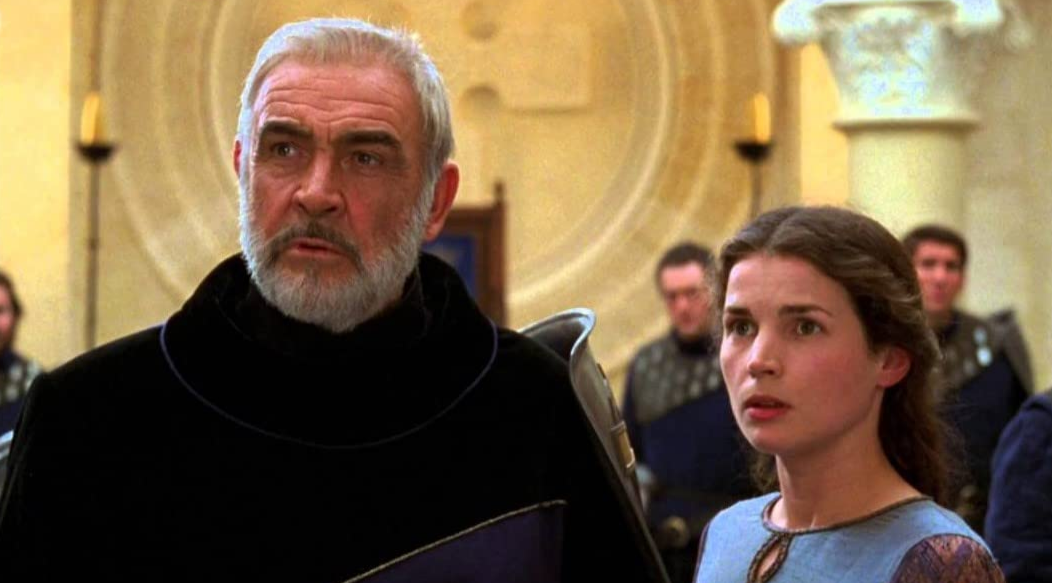 Richard Gere may be miscast as Lancelot but First Knight is still great fun with Sir Sean Connery stealing every scene with his sheer presence and there are some impressive sword fights and battles. Jerry Goldsmith’s music score is one of my personal favourites too.

Plot: Lancelot (Richard Gere) is incredibly skilled at fighting, but when he meets the lovely Guinevere (Julia Ormond), he can’t seem to get past her defenses. She is betrothed to King Arthur (Sean Connery) and plans to go ahead with the wedding, despite her attraction to Lancelot. When the devious warrior Malagant (Ben Cross) rises up against Arthur, Lancelot must try to put his feelings aside and defend his king, Guinevere and all of Camelot.

Review: *Spoilers ensue* I’m still having a bit of a Sir Sean Connery phase and yesterday I watched First Knight which is a film I’ve always loved despite Richard Gere being hilariously miscast as Lancelot. It’s not that he’s bad in it, it’s just jarring to hear him with an American accent when everyone else is British.

I can see why he was cast though as he has that confidence and swagger required for the role of Lancelot; while watching it I was thinking how much I hated Lancelot as all he was really interested in was getting together with Guinevere (Julia Ormond) despite her getting married to King Arthur (Sean Connery). This of course was always part of the legend so it doesn’t come as a surprise but I still dislike him. Julia Ormond in the 90’s would usually be cast as the strumpet who was in love with like 12 guys at once so she was well chosen to play Guinevere.

Connery just eats up the screen, perfectly cast as Arthur with his sense of honour; he portrays him as a man with a dream of Camelot but when he discovers Guinevere and Lancelot together, he questions himself and his own judgement as he vouched for Lancelot.

The late Ben Cross made for an effective villain as the hateful Prince Malagant who thinks that Arthur’s laws are tyrannical, and he wants Camelot for himself. This provides us with several battle scenes with one at nighttime particularly exciting. There are no shortage of sword fights and derring-do with Lancelot regularly coming to save Guinevere all in the hope of rescuing her from her clothes. I still think Lancelot should have died at the and rather than Arthur as he was very much an anti-hero that was hard to root for despite being a skilled warrior.

Jerry Goldsmith’s score is one of his best and Arthur’s Farewell at the end is filled with epic choirs for the final battle and I challenge you not to shed a tear at Arthur’s funeral which is even more moving to watch now. I was reading that Maurice Jarre was initially hired to score the original three-hour cut of the movie (which I still want to see). According to IMDB he was given only four weeks to write ninety minutes of music and, believing that it wasn’t enough time, he declined the offer. Jerry Goldsmith was hired at the last minute, had limited time to compose the music, and was left with only three and a half days to record it. It’s amazing that the score turned out as magnificent as it did.

Some have complained about the film not being historically accurate but I consider this a fantasy picture and enjoy it for the escapist swashbuckling entertainment that it is.

It almost feels like a Game of Thrones prequel with several cast members in early roles like Liam Cunningham and Ralph Ineson. We also get to see the late, great Sir John Gielgud as Oswald who was Guinevere’s friend and mentor; this also reunited him with Ben Cross and they both starred in Chariots of Fire.

Overall, after 25 years First Knight is an enjoyable romantic action drama with Sir Sean Connery stealing every scene as always but Ben Cross was also wonderfully malevolent as the villainous Malagant. There are some awesome battle scenes and Jerry Goldsmith’s score is fantastic making this perfect escapism for these troubled times.