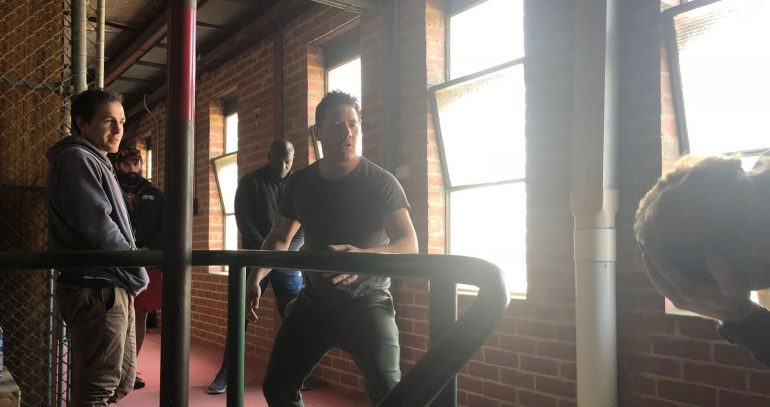 The action driven short film THE PROPOSAL is presently in pre-production set to roll under the camera this coming July, 2018!

The film stars newcomer actor/martial arts expert Marc Natoli (The Siege of Robin Hood) and Kahli Williams (Neighbors). It is written by John Fallon (American Muscle, The Shelter) is Directed by Ben Whimpey (producer of Quanta and Arrowhead), Edited by Elizna van der Walt while the DP is Juzzy Kane. The Music will be by Dmitri Golovko.

Synopsis: When gun for hire and all around tough customer Mason Stone (Marc Natoli) takes his long time girlfriend Emma (Kahli Williams) out on the town with the intent of popping the big question, he finds his proposal plans rudely interrupted by a group of highly skilled assassins who want him dead. What’s a man to do in this kind of situation? Only one thing: kick butt.

Writer/Co-Producer John Fallon had this to say about the project:

“I thought I was done with short films. But when Marc Natoli, a fighter with superior skills to the norm came to me with a story idea for an action short, I was intrigued. And then when I learned what his team’s intent was technically – to basically “out-Crank” CRANK – I was sold in coming onboard to write the script. The Proposal can be perceived as many things, a short film on its own, a proof of concept for an impending feature (the potential is there IMO) or a show- off piece for all involved –but one thing is for certain – it will kick that ass like ass hasn’t been kicked since The Raid in 2011!”

Star and Producer Marc Natoli had this to say about his approach to the action: “As far as the fighting and choreography goes, what we’re aiming for is to be different than what’s been done before. The 25 years of combat sports and Martial Arts I have under my belt has made my fighting style quite unique. Everything will be as realistic as possible. I’m going to bring together the speed and flow of Jeet Kun Do, Kali escrima, silat movement and the aggressiveness of boxing, kickboxing, wrestling and Thai styles. They will be defined and as technical as possible while staying true to realistic kick ass movements. I want people to see every move and be like f*ck that’s how it’s done!” “Our aim is to fill the film with bold and unique camera moves and we have all the toys to do so! Free Fly Alta 8, 16 feet Techno Crane and more! In some of the fighting sequences, the camera will be choreographed to go in tandem with the action and it will look like it was all filmed in one take. We’ll even have a gimbal operator on roller blades at some point. Yes, we’re going above and beyond!”

Marc Natoli and Antonio Raiola also act as Executive Producers on the picture. Natoli Productions, ARR Productions, Indimax Productions and Bruise Productions are behind the film. You can follow the production via the Official Instagram page here: