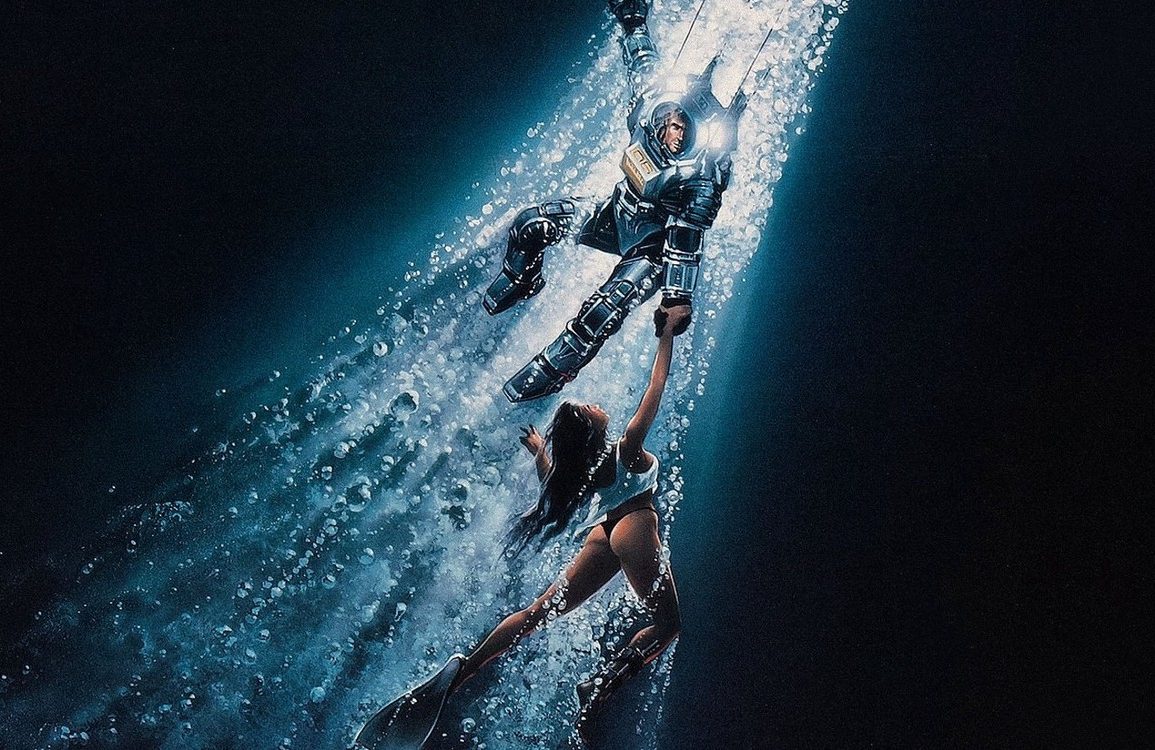 Plot: Hired by Martin (Meg Foster), the head of a major corporation, a crew including geologist Steven Beck (Peter Weller) descends to the ocean’s depths for a mining project. When the undersea explorers find a sunken ship and investigate, they inadvertently bring a malevolent life form on board their vessel. The creature kills some crew members and causes them to mutate, resulting in a battle for survival against an unknown force far below the surface of the ocean.

*Some spoilers ahead if you haven’t seen the movie before.*

I’m ashamed to say that I had never watched this movie before until tonight which I now regret as it was a hugely entertaining action horror hybrid mixing together The Abyss, Alien and most of all The Thing. This is more of a horror flick than all-out action but there is enough cool weaponry and kills to meld the genres together.

The atmosphere feels like Alien with this ragtag group of people in confined spaces as it slowly builds up to finding a creature in their midst. It could easily pass as a spinoff or sequel to The Thing as the creature is pretty much the same. We also get some fantastic practical effects and although it never gets as gory as The Thing it still has its moments.

The impressive cast is one of the biggest selling points as it includes Rambo’s Richard Crenna, RoboCop himself Peter Weller, Amanda Pays from The Flash, Ernie Hudson from The Crow and Home Alone’s Daniel Stern.

Stern really is at his sleazebag best in this film, so you know that he is first on the chopping block as he has no redeeming qualities as a human being. He sexually harasses the female staff of their underwater mining rig and is generally just a greasy piece of shit.

I used to be in love with Amanda Pays back in the 90’s when she did The Flash and it’s another reason why I am disgusted with myself for letting this one slip under the radar for so long. She goes into Ripley mode for Leviathan and is arguably the most appealing character in the crew.

Peter Weller is the man in charge and is perfectly cast as he gives off that stern authority while also being likable at the same time.

Ernie Hudson is always immensely watchable, and he was a staple of my childhood with roles in movies like The Crow and Ghostbusters; he just brings that everyman personality where you believe him in any role he’s in. I hated how they killed him off at the end of this however, as it wasn’t necessary. I also thought the sharks showing up felt tacked on and was a little overkill.

The score is immediately recognisable as Jerry Goldsmith who remains one of the greatest movie composers of all time. This is a loud and bombastic score which really kicks in during the final half hour when the surviving crew decide it’s time to destroy the creature.

As I say it’s a little slowburn in the first half but it builds up the tension nicely and the second half is when all hell breaks loose.

Overall, Leviathan may be derivative of other movies but it’s still a fun time with a first-rate cast and impressive visual effects that still hold up to this day. If like me, you have somehow managed to miss this movie up until now and are a fan of films like The Thing then check it out.