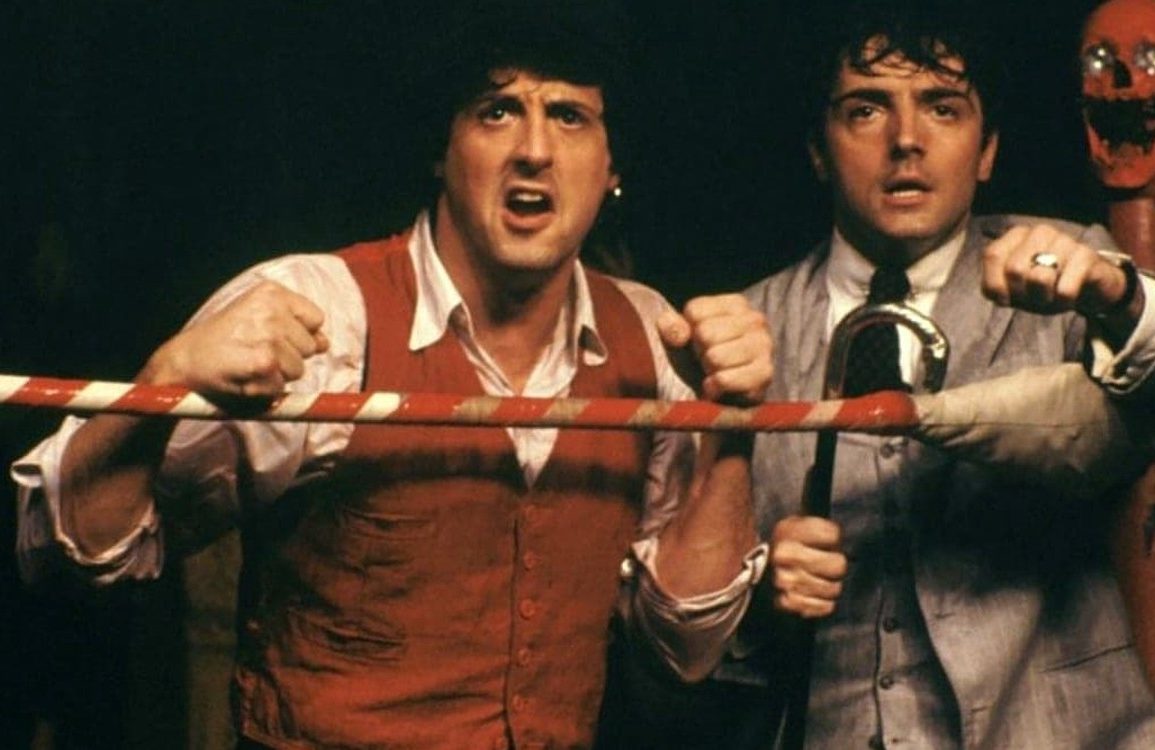 Plot: The Carboni brothers — con man Cosmo (Sylvester Stallone), disabled war veteran Lenny (Armand Assante) and dim-witted Victor (Lee Canalito) — are determined to leave the slums of New York City. Their best escape route is the muscle-bound Victor, whom a manipulative Cosmo convinces to become a professional wrestler. The wins and prize money pile up, until neighborhood gangster Stitch wants in on the action, scheduling Victor to fight the dangerous Frankie the Thumper in a marathon match.

Mike Eggers requested I review this movie as we’ve never covered it before on the site; I have to confess I had actually never seen it so I was curious to find out what it was like.

Sylvester Stallone wrote, directed, starred and even sang the opening theme song to Paradise Alley which came out two years after the original Rocky in 1978.

This is more of a drama than an action movie but there are wrestling fights in it and it stars Sly Stallone so that’s good enough for me to cover it here.

In Paradise Alley Sylvester Stallone plays Cosmo Carboni, one of three brothers; the other two are Vic (Lee Canalito) and Lenny (Armand Assante). Side note: Stallone and Assante would of course reunite for Judge Dredd many years later.

Cosmo is surprisingly a rather annoying character who has a big mouth and it’s one of the rare times where you would want someone to punch Stallone in the face to shut up. He is the opposite of Rocky who was the lovable underdog that you want to see succeed. Cosmo is still an underdog but I found I couldn’t take to him at all; it’s his brother Vic who is the most likable of the three. Stallone is still great in the role and he does have some choice lines but the character does grate after a while. Vic is more simple minded and quiet which makes him far more appealing; he will do anything for his brothers as he loves his family more than anything.

Cosmo is always looking for a quick buck and he is quite happy to use his brother Vic in order to make a profit. Vic is a gentle giant but if he is made to fight someone he is a force to be reckoned with. Cosmo sees this and they end up entering Vic into a local wrestling contest so Vic can buy a houseboat in Jersey that he has always dreamed of.

Armand Assante is very restrained as Lenny who has been crippled since the war so he is a man of few words but is usually pretty wise and serious. Lenny becomes Vic’s manager and when Vic starts to become a successful wrestler Lenny changes and becomes even colder and he ends up breaking up (again) with his lady played by the stunning Anne Archer.

Like Rocky it ends with a climactic fight and is feelgood stuff that will leave you with a smile on your face even if Cosmo is a little annoying.

The set design and costumes all look authentic for the period (1946) and despite being set in the ghetto of New York Stallone manages to keep the tone relatively light throughout; the only dark moment features Frank McRae’s wrestler Big Glory which is more poignant than anything.

Overall, Paradise Alley is a thoroughly entertaining drama about family with some wrestling thrown in to keep things interesting. The performances are all strong and even if Cosmo is a little annoying Stallone is still fantastic in the role and like Rocky it will leave you smiling by the end.