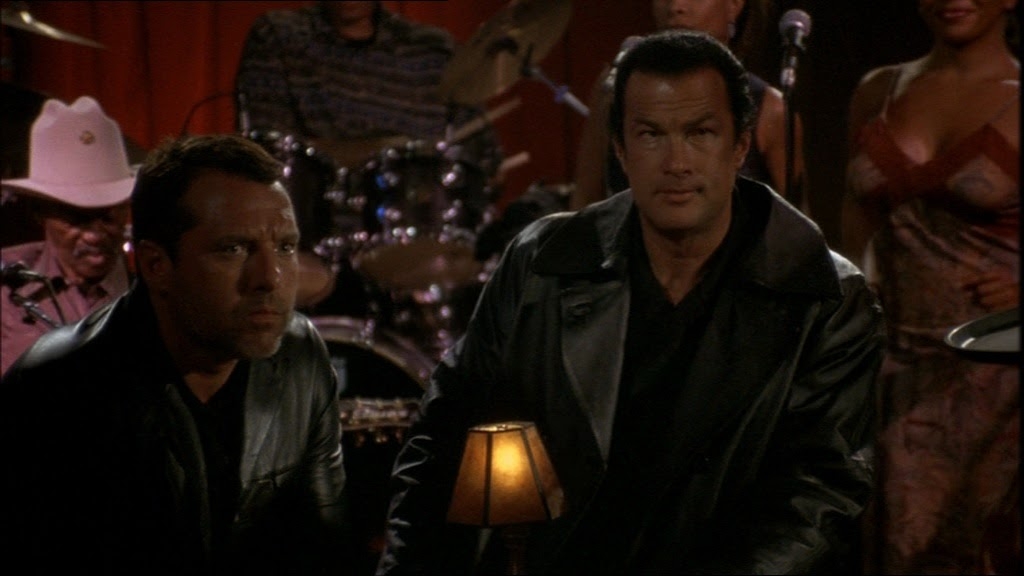 Plot: Grieving narcotics agent Ray Nettles (Tom Sizemore) and police Detective Art Rice (Nas) are assigned to investigate a series of horrific bombings that have rocked the city of San Francisco. When Nettles discovers that these acts of terror are the work of notorious IRA agent Alex Swan (Dennis Hopper), he enlists the help of explosives expert Frank Glass (Steven Seagal). As inner demons threaten to destroy Nettles, Swan engages the troubled man in a dangerous game of cat and mouse.

Here is Eoin’s sordid confession of the day… I had never seen this movie before until last night when it popped up on my Amazon Prime. Steven Seagal, Dennis Hopper, Tom Sizemore, Jaime Pressley, Kevin Gage, Ice-T and Nas star in Albert Pyun’s Ticker.

I had heard all sorts of reviews for Ticker and I gotta say I had a blast with this movie (pardon the pun) but possibly for the wrong reasons.

First off let me mention that I was reading on IMDB that “Albert Pyun hates this film and has publicly apologized for it several times. He says Nu Image suddenly cut off his funds half way through shooting before taking it from him and splicing it with archive footage before releasing it. Pyun has since made an unofficial release of his drastically different director’s cut.” As I have only ever seen the version on Amazon Prime I feel I should see the director’s cut at some point.

I absolutely adore Albert Pyun when he does his sci-fi movies like Nemesis and he can make the best of a limited budget by improvising but it’s a shame this was taken from him before he actually got to finish it which is why it’s such a hot mess.

In Ticker there is some footage of certain scenes from other movies like Sweepers and The Peacekeeper but also stock footage of explosions. This also does something which I’ve rarely seen. Our antagonist never actually shares the screen with our leads. So we have Dennis Hopper, Tom Sizemore and Steven Seagal however, at no point do we see the three of them on screen together. We see Sizemore and Seagal plenty but Hopper obviously just showed up for one day, read his lines and buggered off again. Apparently when his scenes were showed to him later, he was amazed at what he had done and declared it “a righteous day’s work.”

Anyway, so Dennis Hopper plays the lead villain who is a mad bomber and provides one of the worst Oirish accents ever committed to film; it’s all over the place and it would have been better if he was just a terrorist rather than from the IRA. His character is rather similar to Howard Payne from Speed in that he is a total maniac and it’s the type of role Hopper was always so good at; it’s just too bad about that accent but hey, he only had one day…

This was one of the last few roles for Seagal where he played a lead and had a major role without being dubbed over by anyone else (although Sizemore was dubbed). In Ticker he plays Frank Glass, a member of the bomb squad who leads a team of unhelpful assholes who don’t like to call bombs bombs because reasons. I mean, Nettles (Sizemore) comes looking for help and Glass and co. are rude to him and people end up dead because they are dicks. Good job!

Seagal’s character spouts regular words of wisdom which should inspire your daily life but for most of the time he is an arrogant prick… big stretch there. He doesn’t even get to bitchslap many people until the finale but instead spends the rest of the movie looking sanctimonious.

You’ll notice I mentioned Ice-T up above… well I saw him on screen for like 3 seconds then we never see him again; did he die while I blinked? I really need to track down that director’s cut.

Despite all the various fuckery going on behind the scenes I still enjoyed the movie and it’s the type of flick I’d grab a couple of cans to watch for maximum entertainment.

Overall, Ticker is a bit of a mess thanks to the studio butchering and the director renouncing it but if you’re in the right mood then you might just find something to enjoy.