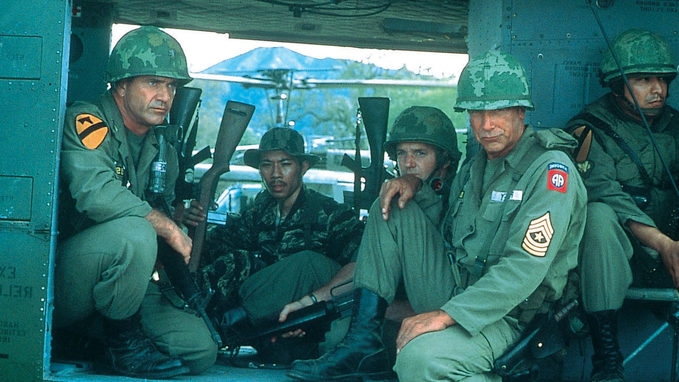 Plot: The story of the first major battle of the American phase of the Vietnam War, and the soldiers on both sides that fought it, while their wives wait nervously and anxiously at home for the good news or the bad news.

I know! I know! I’m not sure how I managed to not see this up until now but the crime has been rectified and last night I saw We Were Soldiers on Netflix and knew the time had come.

We Were Soldiers is the type of movie I always wanted to watch but just never got around to it but I think it was very much worth the wait. Mel Gibson plays one of his purest characters who is easily the nicest person to have ever been in the military so I’m not sure how true to life that would be, but it has you rooting for him right away as he plays Lt. Col. Hal Moore as incredibly sympathetic.

The first half of the movie builds up all the characters just so when they die you know who they are; oh you’re wife just had a baby? Please allow me to fit you with this bodybag, good sir. It actually causes some unintentional mirth as there are cliched moments where literally as soon as someone mentions the word “baby” or “family” they get shot.

It still manages to make you care for everyone but in-between the incredible battle scenes we cut back to the wives of the soldiers who are waiting for news of their husbands and these are the most emotionally charged moments of the entire film.

This is basically a who’s who of up and coming talent at the time including Jon Hamm, Desmond Harrington, Barry Pepper and Chris Klein but we also have the likes of Greg Kinnear and the amazing Sam Elliott. The only thing I find more harrowing than the battle scenes in We Were Soldiers is the fact that Sam doesn’t have a mustache in it; I feel like the Earth will spin off its axis and hurtle into the sun as this just isn’t right. As you’d imagine he still has some the best lines and is a surly bastard which I can totally get behind as I get older.

The battle scenes really capture that absolute hell that is war and I salute anyone who has ever had the balls to fight in one. Some of the scenes are so intense I forgot I was watching a movie and was right there with them.

I liked how the Vietnamese were shown as human beings too (a little) as they are usually just shown as the “bad guys” who are used as cannon fodder.

If I were to compare this with Gibson’s Hacksaw Ridge I would I say I prefer that but We Were Soldiers is still an amazing film that makes you care about most of the characters with strong performances and stunning battle sequences.