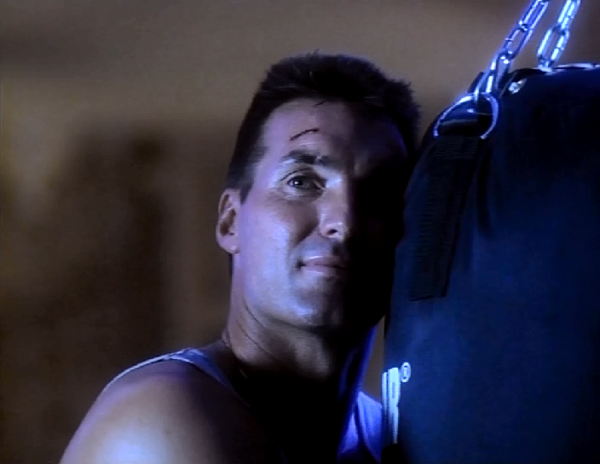 Fist of Honor is one of those blissful 90 minute actioners that flies by and there are barely minutes between fight scenes so if you’re a fan of PM Entertainment then you’ll really enjoy it.

Plot: A double-crossed boxer (Sam Jones) enters a mob war to avenge his girlfriend (Joey House) and settle the score.

Review: Fist of Honor is another PM Entertainment gem starring Sam (Flash Gordon) Jones and despite the low budget there’s a lot fun to be had. I really enjoyed the story believe it or not as it was something a little different. Jones plays a mob enforcer who is paid to beat people up who owe his bosses money so the movie is basically him punching people in the face and vice versa and I have zero problem with that.

The mob bosses are all hilarious Godfather stereotypes one of them tries to make everything sound really serious but just ends up being unintentionally hilarious; so some of the dialogue is a little unnatural but as always that’s part of the fun. There is also a role from Godfather star Abe Vigoda who (of course) plays one of the warring mob bosses.

It also has a quality 90’s love scene with saxophone and nudity so no complaints there; we need more saxophone love scenes in today’s cinema…

Sam Jones himself was never an amazing actor but he was pretty decent as an action hero and in this I liked how he uses his size during the fights. There’s no flashy martial arts from him; he just punches and kicks his enemies into submission usually while taking a severe beating himself.

Overall, Fist of Honor is one of those blissful 90 minute actioners that flies by and there are barely minutes between fight scenes so if you’re a fan of PM Entertainment then you’ll really enjoy it. It’s B movie gold.