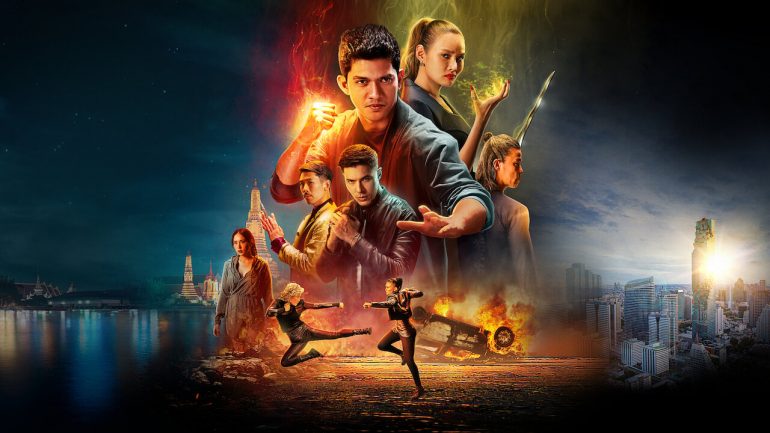 If you can get past the awful songs used in the fight scenes and the nonsensical story then Fistful of Vengeance is a fun time with our leads proving appealing and there are some funny moments to make this a harmless diversion.

Plot: A revenge mission becomes a fight to save the world from an ancient threat when superpowered assassin Kai tracks a killer to Bangkok.

Review: Today sees the release of Fistful of Vengeance, a sequel to the Netflix series Wu Assassins once again starring Iko Uwais, Lewis Tan, JuJu Chan Szeto and Lawrence Kao. Wu Assassins was only out a couple of years ago and yet I remember very little about it aside from the supernatural element being very silly. If that put you off the show then Fistful of Vengeance likely won’t win you over as it’s more of the same except with harder edged action. At one point Iko Uwais takes on his opponents with an axe and in another he uses meat cleavers so we’re clearly channeling The Raid.

The tone is much lighter here though with some nice touches of humour and director Roel Reiné (Dead in Tombstone) gives the film a glossy sheen so it’s not as gritty feeling; I got Mortal Kombat vibes from the story and action with the various characters using their supernatural powers in battle.

It’s a fast paced 90 minutes and rarely goes more than a few minutes without a fight scene breaking out but what really lets the film down is the music. My pet peeve is using awful songs during fights or action scenes as it distracts you from it and personally takes me right out of it removing any stakes; it should be a musical score or nothing at all as it got very annoying very quickly.

The script isn’t amazing but as I mentioned there are some entertaining moments of humour and the Baby Yoda line especially made me laugh. Our three leads are appealing and Iko Uwais has been given more to work with in terms of a character this time; Lewis Tan can never not be cool and is one of my favourite actors working today and Lawrence Kao brings the heart to the story as he wants revenge for the murder of his sister Jenny.

They get help in the forms of Adaku (Pearl Thusi) and Preeya (Francesca Corney) who are a welcome addition so we are rooting for our team the whole way. I should also point out that it’s great to have some nudity in a movie again, we rarely see that in today’s movies so kudos for that.

Justin Tobin (Warrior) is also new to this world as William Pan who may or may not be out to help our team; it’s too bad Mark Dacascos and Summer Glau didn’t make a return for this film but there’s always another sequel…

Fistful of Vengeance clearly has a decent budget as the visual effects are impressive and we can see all the action clearly, but there isn’t anything that truly stands out.

Overall, Fistful of Vengeance is an entertaining fantastical fight film with appealing leads and a fast pace; it’s let down by truly horrendous musical choices which ruins a lot of the action scenes but if that doesn’t bother you then you’ll enjoy this movie more than I did.