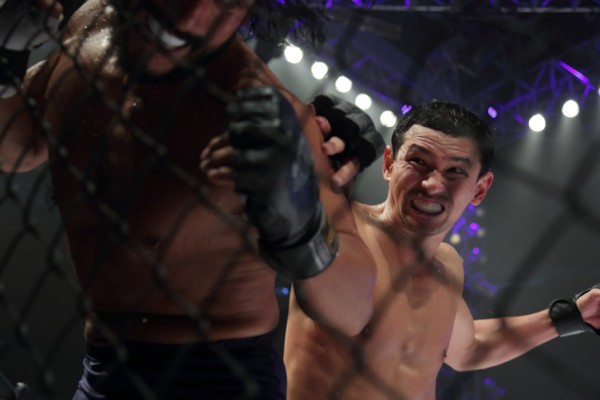 Fists of Legend is a fantastic movie with engaging characters and thrilling fight scenes; it’s just a shame it’s so long though so it’s not one I would want to sit through very often.

Plot: On a television show billed as “the greatest fight show on Earth,” eager amateurs with lots to prove boldly step into the ring and expect to leave bloody but victorious. The ratings hungry producers seek out “legendary” but largely forgotten streetfighters and mine their desperation for recaptured glory and redemption into ratings gold. Three old friends and rivals from high school days who get their invitation to the big fight for the chance to win $200,000 and much more. 25 years later – Deok-kyu, whose Olympic dreams were dashed, now runs a struggling noodle shop. Jae-seok who always wanted to be number one but still finds himself in a third-rate gang. And Sang-hoon, a thug turned corporate executive who must go back and find his bloodlust one last time.

Review: Korea really has been bringing out some great martial arts/action movies over the past few years and one of the best has to be Fists of Legend. It’s no relation to the Jet Li movie Fist of Legend (which is confusing) but instead tells the tale of three old friends and rivals who face off against each other on a TV program called Legendary Fighter.

What really stands out about Fists of legend is how well developed the characters are; our lead Deok-kyu (Hwang Jung-Min) at first comes across as a humble noodle restaurant owner but as the story progresses we find out about his past and his penchant for getting in fights.

Hwang Jung-Min has an incredibly expressive face with sad, haunted eyes and a surprisingly gentle smile which betray his awesome boxing skills. You’re behind him every step of the way though as he is an older and (slightly) wiser person than he was during his fighting days. He only wants to compete in the show so he can provide a life for his daughter Soo-Bin (Ji-Woo) since his wife passed away.

The performances by the entire cast are first rate and we get to spend time with the main characters and see how they have changed since their “legendary” days in school.

The film is shot in a glossy style with seamless fight scenes which are brutal and realistic looking; the only real problem I had was the run time; it’s 2 and a half hours long and at times you notice the length so a few moments could have been trimmed.

Overall, Fists of Legend is a fantastic movie with engaging characters and thrilling fight scenes; it’s just a shame it’s so long though so it’s not one I would want to sit through very often.