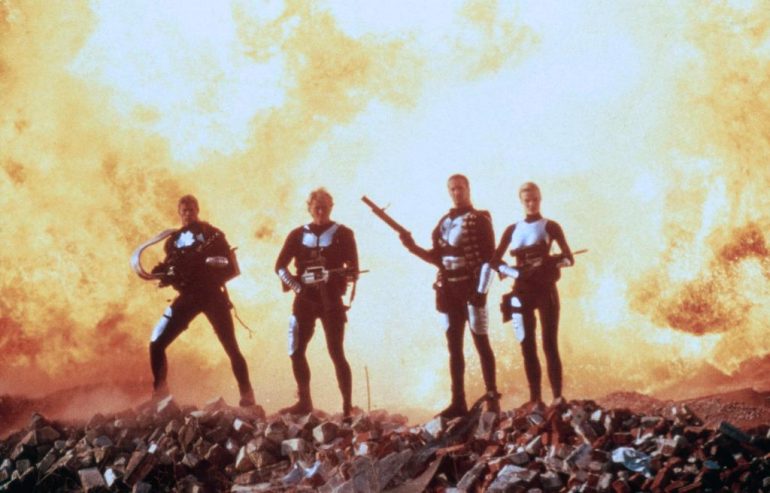 Plot: In the near future, after a hostage situation goes awry, the last resort option of law enforcement, cybernaut unit T-Force, is ordered to be disassembled. But the robots see this as a “threat to their self-preservation” and go on a killing rampage. It’s up to police lieutenant Jack Floyd and one of the cybernauts, who is on the right side of the law, to bring them down.

In case you hadn’t noticed I’m kind of going through a 90’s cyborg movie phase at the moment so today I want to draw your attention to the cheesetastic T-Force starring Jack Scalia, Vernon Wells, Evan Lurie and Bobby Johnston.

As soon as the glorious PM Entertainment logo pops up on screen, you know you’re in for action and thrills aplenty and T-Force delivers the goods.

Jack Scalia is perfectly cast as the grizzled cop who likes Jack Daniels but hates robots and when he is forced to team up with Cain (Johnston) to take down Cain’s former robot colleagues an unlikely alliance builds between them and the story essentially becomes I, Robot. It was certainly an influence on the story with references to Asimov’s three laws of robotics.

The movie wastes no time in getting going with the opening shot featuring the 4 robots standing with things exploding behind them in true 90’s style. There are like 12 moments in this movie with people walking away from an explosion in slow motion or just standing in front of one looking cool. The action never lets up and still remains impressive as this was before the days of CGI so we get squibs and real shit going boom which never fails to impress.

What’s funny is that none of the actors playing the T-Force actually act or behave anything like robots; they are all a bit too human but really, who cares? We’re looking for guns, ‘splosions and one-liners and this delivers in spades.

It has a saxophone-flavoured soundtrack during a fantastically unintentionally funny love scene between two of the robots which is cringe-worthy (but so entertaining) and the added bonus of bewbz always helps. Not enough of that in today’s action cinema…

Most importantly it has a massive bodycount which satanclause1 has put into a video.

That’s a lot of dead bodies with a total of 68 kills.

If you haven’t seen T-Force you need to check it out as it’s a load of harmless fun with nearly constant action, a cool lead in Jack Scalia and some nudity. Not bad for a tin man…