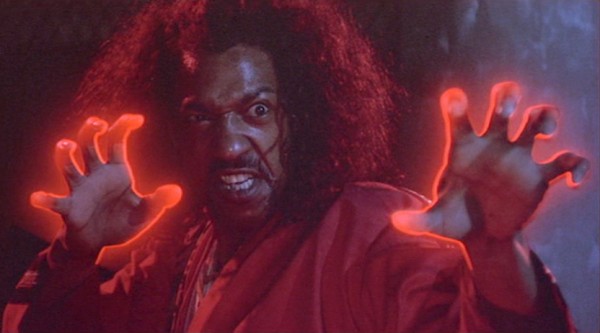 Plot: In New York City, a young man searches for the “master” to obtain the final level of martial arts mastery known as the glow. Along the way, he must fight an evil martial arts expert and rescue a beautiful singer from an obsessed music promoter.

The Last Dragon is such a wonderfully 80’s film and even today it remains endlessly entertaining and just pure fun. I love the over the top characters, especially the scene stealing villain Sho’nuff AKA The Shogun of Harlem, played by the late great Julius Carry; he eats up the screen and manages to be funny, but also intimidating at the same time.

Taimak is our hero Leroy Green; a naïve but likeable martial arts enthusiast who finishes his training with his master but feels he has more to learn. He is a man of honour and tries to avoid violence if necessary, but when he sees a damsel in distress, he can’t help himself and must save her. His quest in this movie involves trying to achieve “The Glow” which would mean he has officially become a Master; so he sets off around New York to make his dream a reality.

Leroy’s nickname is “Bruce Leroy” due to him being an obsessive Bruce Lee fan and this really makes the film feel like an homage to Bruce, with lots of references to Enter the Dragon.

The scenes at the Seventh Heaven Club contain very 80’s music do kill the pacing at times however, any time Vanity is on-screen she light is up. When the fights happen, they are pretty awesome with first rate choreography from Ron Van Clief (who was also Taimak’s teacher). Taimak studied Chinese goju, goju-ryu, taekwondo and jujitsu so watching him fight is impressive.

The final battle between Leroy and Sho’Nuff is nicely done with a satisfying outcome too. There has been recent talk of a sequel which would be pretty cool but I don’t know how you could do a similar movie and make it work in a modern setting. It’s very much a product of the 80’s and I think too much time has passed for a follow up.

Overall, The Last Dragon is a difficult film to dislike simply because of its sense of fun and appealing cast. There is the occasional pacing lag with the dance scenes at the club but it’s hard not to just enjoy the music and characters.