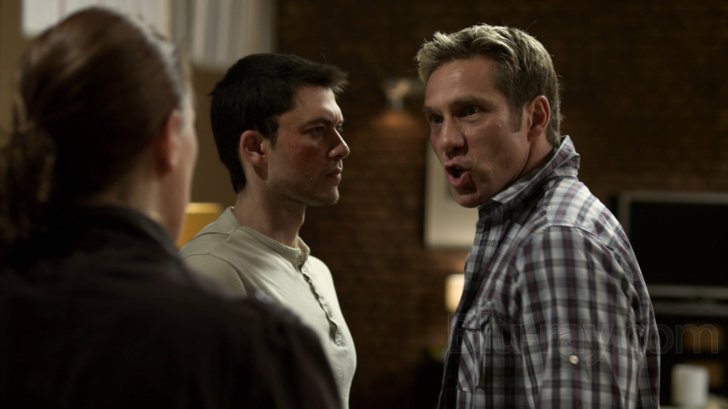 Force to Fight is one of Gary Daniels’ best films with a few nice plot twists and fantastic fight scenes.

Plot: Blackmailed back into the arena by a ruthless crime boss, a former underground fighting legend must survive a gauntlet of savage matches where losing just one fight… means losing it all.

Review: Forced to Fight is one of Gary Daniels’ finest hours; it’s a rather dark tale and not exactly full of laughs but it has a gripping story and Gary gives one of his best performances to date.

The concept isn’t anything all that new but there are a few twists and turns that came out of nowhere and it wasn’t afraid to take some risks.

Shane Slavin (Daniels) is a retired fighter and trying to live a peaceful life, but when his brother gets into trouble with some mobsters led by Peter Weller, he is forced back into the life he had left behind. So far, it’s a typical martial arts story, but what was cool is that as reluctant as Shane initially is, when he starts fighting again he starts to really enjoy it.

He becomes a bit of an animal who gets off on hurting others; this also turns him into a bit of a jerk and he alienates himself from his family. He even turns his back on his brother and kicks him out of the house; what happened next was a bit of a shock but I won’t spoil it in case you haven’t seen the film.

Peter Weller is phenomenal in this movie as underground fight promoter and scumbag Danny G. About half-way through the movie you wonder just how evil he is and that maybe he just might be reasonable… nope. He’s a bad egg through and through and nearly steals the movie; even when he’s playing a good guy I think Weller can come across as intimidating.

The acting in general is decent but the fight scenes are first rate; it’s not flashy martial arts but limb-smashing mixed martial arts. When Shane first starts to train, he is out of touch with how modern MMA fights are done and he gets his ass kicked… a lot. This isn’t something we see often but I really liked that aspect and made the character of Shane more interesting.

One thing which bothered me is the little side story about Slavin’s son getting bullied at school; that is never really resolved and I would have enjoyed a scene of them getting their asses kicked… despite Shane saying that violence is wrong.

Overall, although it isn’t really anything new, Force to Fight is one of Gary Daniels’ best films with a few nice plot twists and fantastic fight scenes.