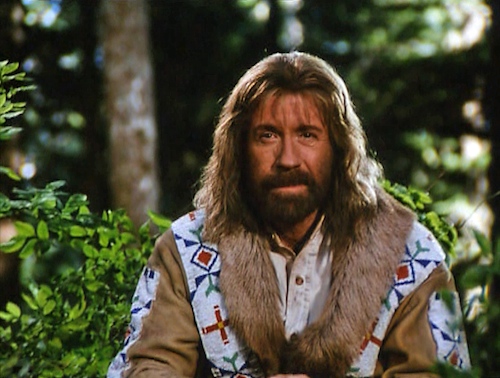 Forest Warrior is appalling in nearly every way. It’s a must-see for all the wrong reasons.

Plot: A shape-shifting mountain man and a group of children team up to protect an enchanted forest from evil lumberjacks.

Review: Any time people on Facebook ask ‘What’s the worst film you’ve ever seen?” so many people mention movies from the last 15 years because they’ve never watched anything older than that. If I were to put my hand up I would say that Forest Warrior is way, way up the list of the worst I have ever seen.

I’m as big a fan of Chuck Norris as the next guy and as I write this I can already feel his gaze and expect him to kill me at any moment but this is a movie which has very little (if anything) to recommend it.

I guess it’s got an admirable sentiment about taking care of nature and the animals, etc. but did it really have to be THIS lame? I mean Steven Seagal told the same story with On Deadly Ground but at least he killed 85 odd people in the process so it was less painful to sit through.

Forest Warrior is a kid’s film therefore it has to have a group of annoying and noisy children in it which is personally my idea of Hell. Anyway, said group of kids decide to head up into the mountains for the night and discover an old tree house where they befriend a baby bear… as you do. They also meet our hero McKenna AKA the Spirit of the Forest (Chuck Norris) who protects them from evil lumberjacks who are trying to earn a living doing their jobs… those bastards. So it’s the old evil land developer story as the kids and McKenna try to stop the bad guys from destroying their forest.

Did I mention the twist about old McKenna? No? Well he’s a shapeshifter and can transform into a bear, an eagle or a pile of utter shite (like this movie); at one point at the end Chuck transforms into a bear… and talks. The fact that I sat through this movie until the end surely entitles me to some kind of award or compensation.

On the plus side Norris does punch a lot of people in the face and it’s satisfying to watch the bullying lumberjacks get their comeuppance but it’s all PG and bloodless. If you want Chuck Norris kicking ass then go watch Missing in Action or Invasion USA instead.

Also, during the movie the kid’s tree house is blown up by the lumberjacks and at the end the town come together and rebuild it… with what looks like a lot of wood. I mean, they saved the forest from an evil land developer and instead they must have cut down quite a few trees for a bastard tree house? Where’s your rage now McKenna? Huh?

Overall, Forest Warrior has an admirable sentiment but the fact that Chuck Norris turns into a fucking talking bear at the end makes this one of the lamest movies I’ve ever seen. I’m now going to go drink myself into a coma to try and forget I ever saw it…