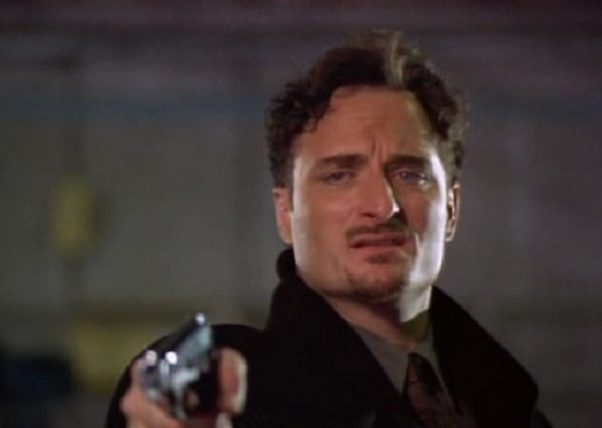 Lethal Tender doesn’t get talked about as one of the better Die Hard clones and there’s a reason for that, it’s not really all that amazing but it does have a few things to make it worth a watch.

I picked it up on VHS a few weeks back (that’s not a typo) and gave it a watch admittedly for the first time. It stars Jeff Fahey in the John McClane-esque role; he’s a cop called Det. David Chase trapped in a water-filtration plant which is held hostage by a mad bomber (Kim Coates) and a thief (Gary Busey).

Let me just say that as great as the cast is to this movie, this is Kim Coates’ film; he just owns every scene and is hilarious as the over the top villain Montessi. He seems to be channeling Bill Murray in terms of his voice which just makes it all the more comedic.

Coates is normally a threatening villain in movies but in this he’s just hilarious and they maybe used a bit too much humour so you are never really scared of him… despite being a murdering psychopath. None of the bad guys feel like real people and are more like evil cartoon characters. Gary Busey does batshit crazy like no one else and happily keeps killing off his own men so he can keep all the money for himself.

Jeff Fahey is one of the more underrated actors out there and I always thought he was really cool; he was my favourite character on the TV show Lost too. Sadly, David Chase doesn’t really have much to do in Lethal Tender and has no memorable dialogue so he would never be remembered like McClane form the Die Hard series. He teams up with conveniently single Melissa Wilkins (Carrie-Anne Moss) who works at the plant and they try to take down the terrorists.

The funny thing is it’s mostly Busey’s Mr. Turner who does the most killing so Chase and Wilkins get to run around and hide a lot. The bad guys have so many opportunities to kill them but as with any good villain they have to talk for half an hour before doing anything, thus giving them the chance to escape.

As this was a straight to video B movie the action is pretty low key with a few shoot-outs and brief punch-ups but nothing that really stands out.

If you haven’t seen Lethal Tender you aren’t really missing much but it’s worth watching for Coates and Busey trying to out crazy each other.