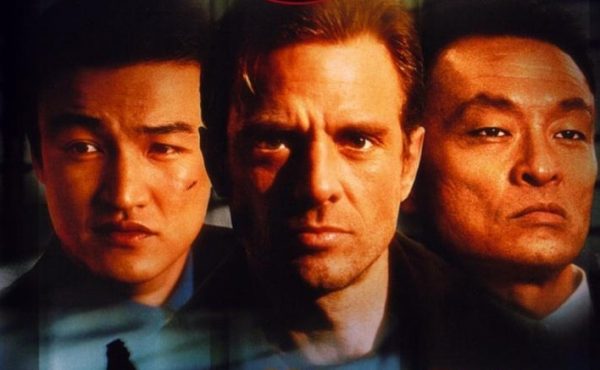 Plot: When detective Tony Luca (Michael Biehn) blows his undercover gig with the mob, he’s shipped off to the homicide department and given a new partner, Kim (Joong-Hoon Park), who has come to the U.S. from Korea to investigate a murder tied to the Yakuza gang. Their cultures and personalities clash, and the two don’t get along — until the mob and the Yakuza start a war, complete with hired assassins. Forced to keep the peace together, the partners try to put aside their differences.

I have to give a shout out to Aaron Crook and Matt Schembari as I have to admit I had never even heard of this movie until last week; so after their recommendation I tracked it down and gave it a watch and it didn’t disappoint.

American Dragons is essentially a culture clash buddy movie which we’ve seen plenty of times before but I really liked the team up of Luca and Kim and the tone was more serious than we’re used to with these kinds of films. There are still a few one-liners and it’s never less than entertaining; the story also moved along well and it’s mostly due to the strength of the cast.

Michael Biehn makes every movie better and remains one of the most underrated actors working today. As I’ve said before he always brings a kind of truth to every role where you don’t feel he is acting, he just IS the character he’s playing. Although Luca isn’t one of his most memorable characters to date he is still massively likable and a total hero so you are rooting for him from the start.

Kim is noble and at first you think he is more restrained than Luca and yet he keeps getting them into fights with various mobsters. I like how he doesn’t take any shit from anyone but is still a good cop. Some of the dialogue you certainly wouldn’t get away with now but that’s what makes it feel more believable.

Rocco (Don Stark) is a hateful bastard who at one point kills someone with a bowling ball which was arguably my favourite kill in the film. It was hard R stuff with plenty of action; we get punch ups, shoot-outs and killings galore so action fans will lap it up.

Cary-Hiroyuki Tagawa doesn’t have a huge role but he always eats up the screen anyway and this was quite different from what I was expecting from him.

I agree with a point Matt made last week about some scenes being too darkly lit; I especially found that with the final fight scenes where it was difficult to make out what was going on. That’s only a minor gripe as the bad guys are disposed of in true action movie fashion but I’ll leave it at that and not spilt it for anyone who hasn’t seen it.

If you haven’t seen American Dragons then you should check it out as Michael Biehn was as awesome as ever and it is wall to wall action from beginning to end. Thanks for the recommendation, gents. Does anyone else have an Underrated or Forgotten Gems you’d like me to bring attention to?