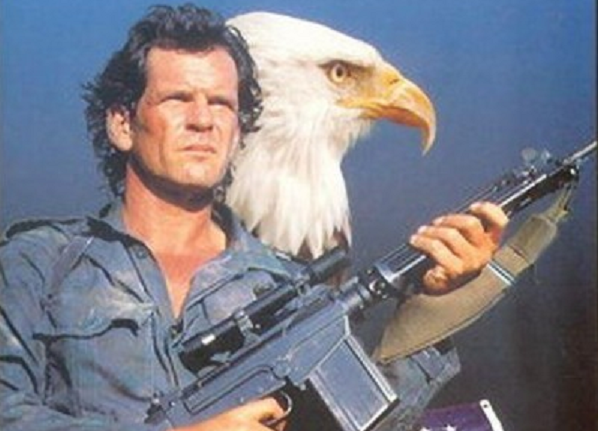 Plot: Twenty years ago, Vietnam turned three American boys into men, but amidst the horror, Johnny Burke cracked. When his friends, Max and Rudy, stop him from torturing an innocent Cambodian girl, he wheels on them and, aflame with hatred, vows vengeance.

I could watch movies like American Eagle all day; nothing too taxing on the brain, just good old-fashioned action with shoot-outs, explosions and a rather epic final fight scene.

Asher Brauner plays our hero Max Shane who eats bacon, smokes two packs a day and drinks vodka for breakfast. He’s also an American patriot (known as Eagle) and a damn good soldier; the problem is his lady friend Angela (Kai Baker) is fed up with him going off to kick ass so much so she decides it’s time to head off to the Ivory Coast and spend some time with her brother Rudy (Rudy Argente). What wasn’t part of her vacation itinerary was getting kidnapped by Johnny Burke (Vernon Wells) who still holds a grudge against Max for what went down in ‘Nam.

So Max travels to the ivory coast to bring Angela home and kill every bad guy who gets in his way.

American Eagle takes itself a little too seriously with no one-liners or humour which prevents it from being truly memorable, but the story has a couple of twists so it’s not just constant carnage (but it mostly is).

Max is generally a one note character who can at times be a dick but he’s just such a badass that he’s hard to dislike. Watch as he casually blows away countless nameless goons without breaking a sweat and by the time he has killed more people than Thanos the film ends with American Eeeeeagle, the most epic song of all time.

Vernon Wells is as reliable as ever and totally owns the movie as the deranged Johnny Burke; he isn’t as over the top as Bennett from Commando but he is certainly a few cans short of a six-pack. I love his final showdown with Max in the warehouse; the way they yell and go at each other just feels primal and it’s a profoundly satisfying finale.

Overall, American Eagle is a good time with a high bodycount, explosions and general carnage. It doesn’t stand out against so many other movies from the time period but I still think it’s awesome.