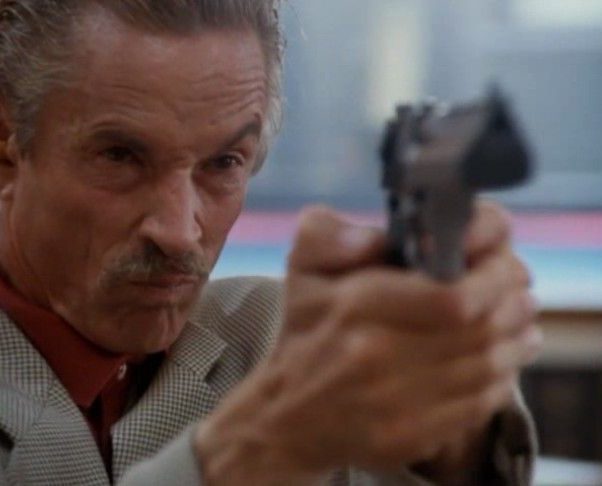 I hadn’t watched this movie for many years but it finally answered a question I’d asked a while back. If you’re part of The Action Elite Facebook Group you’ll remember a few weeks ago I asked if anyone remembered a movie where a cop busts another cop’s balls because he has a laser sight on his gun. For the life of me I couldn’t remember and then BOOM! There it was. Extreme Justice from Mark L. Lester, the director of Commando and Showdown in Little Tokyo. So now that we got that out of the way, let’s take a look back at one of the most underrated gems of the 90’s.

Having genuine character actors in roles like this gives the movie more authenticity and there isn’t a weak performance among them. I’ve always enjoyed Lou Diamond Phillips and this is one of his better leading roles as a brutal cop called Jeff Powers who is close to getting the boot when he is taken on by Scott’s Glenn’s grizzled Dan Vaughn and asked to join their secret police group known as SIS. They deal with hardened street criminals but as Powers gets in deeper he realizes the group are really just vigilantes who don’t take prisoners.

I really liked how you didn’t hate the SIS guys but kind of saw their way of thinking even if it is a little harsh. You can see how the job would be attractive to someone like Powers who takes his work very seriously and even splits up with his girlfriend because of it. Admittedly she is kind of annoying and keeps asking questions when she should just shut up but she acts as the film’s conscience trying to keep Powers from going down the dark path.

Although you can tell which way the story is heading I really enjoyed how it ended and was really a morality tale about vigilantism and what separates the good guys from the bad.

There is a particularly tough rape scene which I could have done without but I understood why it was there and it remains the most disturbing part of the movie; it’s also when Powers discovers his co-workers may not be the good guys after all.

At 95 minutes it’s tightly paced and doesn’t go long before shots are fired, faces are punched and blood is spilled. It still holds up well too mostly due to the strong performances and engaging storyline so even if you were to watch it for the first time you’ll still enjoy the heck out of it.

So if you’ve never seen Extreme Justice I highly recommend tracking it down as it’s a quality cop actioner with plenty of action, a stellar cast and an exciting story.