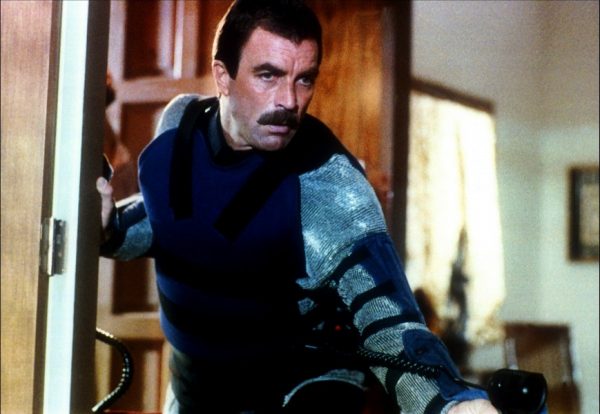 How’s this for a winning combination? Tom Selleck, Tom Selleck’s mustache, Gene Simmons as a villain, Kirstie Alley looking “very attractive” and killer robots all written and directed by one Michael Chrichton. If that doesn’t float your boat then I don’t know what to tell you.

This is pure 80’s gold at its best and the type of story Chrichton excelled at.

Plot: In this advanced society, most homes have robots that perform everyday menial duties. Every so often, one malfunctions, and Sgt. Jack Ramsay (Tom Selleck), an expert in rogue machines, must deal with it. When he and his new partner, Karen Thompson (Cynthia Rhodes), investigate a robot-involved homicide, they discover strange computer chips. Rather than a malfunction, someone is programming the robots to kill. The police must find whoever is behind the murder before more harm is done.

Needless to say, the man behind the murders is a man named Luther played with relish by Gene Simmons; he doesn’t do much other than smile in an evil fashion and taunt Ramsay. He still manages to be an effective bad guy and any villain who has killer robot spiders is ok in my book.

I thought Selleck’s character was a break from the norm in this kind of movie; this was in the 80’s just before Rambo et al hit their peak and here we have Ramsay, a good cop who has a terrible case of vertigo and any time he has to go up a tall building he buckles in fear giving him an extra depth you usually wouldn’t expect in a movie like this.

Selleck has this fabulous matter-of-fact delivery and when he first sees Kirstie Alley on a video screen he casually says “she’s very attractive” which felt like a very natural reaction and was the funniest line of the movie.

Jerry Goldsmith provides the score and although it’s not one of his more memorable themes it is wonderfully electronic sounding and works perfectly for the movie.

It was cool that they actually used real robots even if they were rather non-threatening looking by today’s standards. If they were to do a remake I’d probably check it out but it would lose that 80’s cheesy charm.

The finale has Ramsay facing off against Luther on top (very high) scaffolding so not only does he have to face a bad guy (with killer robot spiders) but he also has to face his fear and conquer it. Will he do it and save the day? I’ll give you one guess…