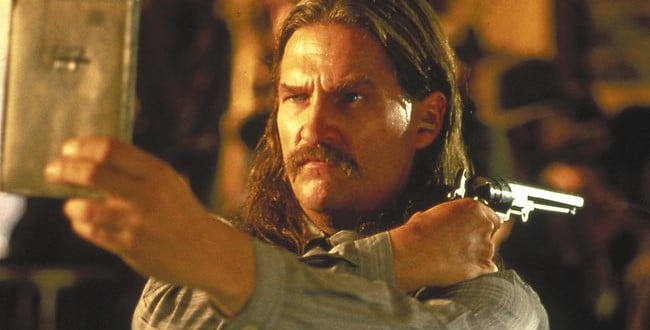 Plot: Gunfighter Wild Bill Hickok (Jeff Bridges) travels the frontier, gaining fame and enemies in roughly equal measure. He sometimes meets up with his friend and occasional lover, Calamity Jane (Ellen Barkin), and he headlines for a while in a traveling circus. Along the way, he meets Susannah (Diane Lane), his one true love, but spurns her for the outlaw life. With his health deteriorating, Bill rides into Deadwood, S.D., as his past catches up to him.

I think Walter Hill may well be my favourite director as he is one of the last of a dying breed of filmmakers who makes unapologetically manly movies.

Wild Bill is one of his lesser known pictures and although it’s far from a classic it is still a hugely entertaining Western with Jeff Bridges playing the legendary gunman who is gruff yet sympathetic. He is not painted as some great hero but is more honest showing Bill as an opium user who sleeps around, kills without remorse and does things his way.

It doesn’t really have much of a narrative with it being told in flashbacks and comes off more episodic as we revisit some of the most iconic moments in Wild Bill’s life. It’s really the second half of the movie where the primary focus is the on/off relationship between Bill and Calamity Jane (played by Ellen Barkin giving one her finest performances to date) and the build up to a final confrontation between Bill and someone from his past.

David Arquette plays Jack McCall, the man who would eventually take Bill’s life as he blamed him for walking out on his mother (Diane Lane). Although McCall isn’t remotely likable and is almost obsessed with killing Bill (while also grappling with the concept of taking another man’s life) you can see his side of things and it’s one of Arquette’s best roles.

It wastes no time getting going with plenty of shoot-outs and the action is as slick as you’d expect from Walter Hill.

There are many different interpretations of Wild Bill including Keith Carradine who would play him in Deadwood (also directed by Walter Hill) but I think this is one of my favourites as I love Bridges in the role and I think Ellen Barkin gives easily her best performance to date. It’s worth checking out for both fans of Westerns and Walter Hill.