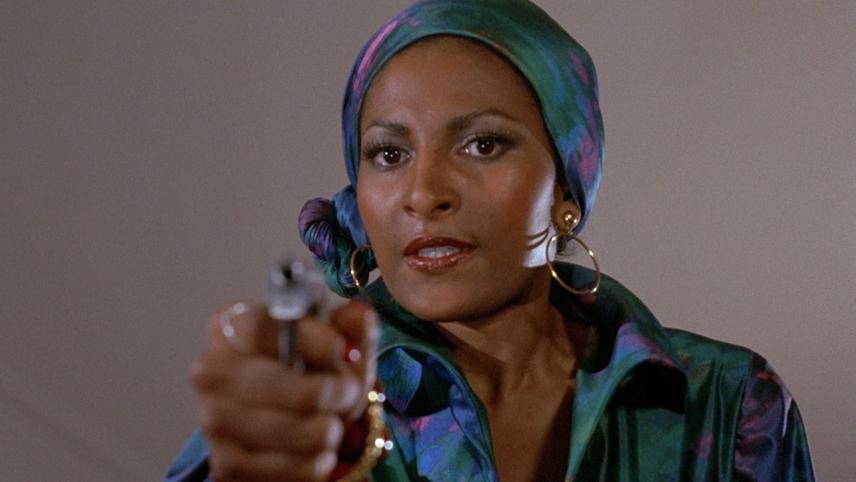 Plot: Unable to pay back the $20,000 he owes the mob, small-time hustler Link (Antonio Fargas) instead gives up the identity of an undercover cop (Terry Carter) who happens to be dating his sister, Foxy Brown (Pam Grier). When gangsters later kill the cop, Foxy is quick to make the connection and swears vengeance. Posing as a prostitute, and with the help of a group of neighborhood vigilantes, she gradually tracks down the hit men, their Mafia bosses and her own brother.

Pam Grier headlines this Blaxploitation gem which although a little dated still manages to be cool with awesome music and plenty of style. Grier plays Foxy as a believable and realistic heroine who gets drawn into the seedy world of drug dealing and prostitution thanks to her piece of shit brother Link (Antonio Fargas).

Imagine your own brother selling you out like that? Link deserved worse than the fate he got in this movie and he was arguably nastier than the main villains. The fact that I was so emotionally involved in the story proves how well told it was and even today it manages to disturb.

When Foxy is captured by the bad guys she is drugged and raped; thankfully it happens off screen but you see enough to get a sick feeling in your stomach. There are some particularly vile rednecks who are disposed of quite quickly and satisfactorily.

The main villain is a woman called Katherine Wall (Kathryn Loder) who runs the whole operation and is in love with her main henchman Steve Elias (Peter Brown). He is more of a ladies man and doesn’t have the same feelings for her but he plays along just to stay on her good side. You will hate both characters who always stay so calm about how they dispose of people but like the redneck characters, their stories all end well.

There’s plenty of action with shoot-outs and fist fights but also some rather impressive stunt work, noticeably when Link is on the hood of car as it speeds down the street.

Some of the acting from the supporting cast won’t win any awards but it’s never that bad and the lead actors are decent. It’s great to see an early role from Sid Haig as a pilot that Foxy uses in order to seek her revenge.

After all these years Foxy Brown is a tough watch at times but it’s always entertaining and Pam Grier is awesome in the role.