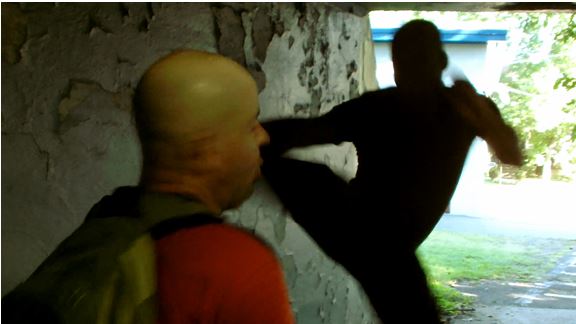 After months of delays, change in weather and set backs on Newark Films last project EXTRACTION POINT, the film has been put on hold until further notice.

With this actors who were a part of the film never got to see the footage until now.

Actor / Martial artist and Filmmaker  Franklin Correa had to need to give his actors who travel from long distances to work with him something they could be proud of so instead of cutting clips together he has taken the footage and turned into a short thriller entitled BLUEPRINT.

The film follows two friends, JASON (Franklin Correa) and LARRY (Dan Gregory) who takes any job for the right price, until they cross paths with OLGA (Jennifer Rasbold) and her right hand man LOBO (Kofi Nsafoah). Agreeing to do what they want and drop off a mysterious blueprint to an undisclosed location, the two must come to terms with doing the right thing or wrong thing leading to a climatic ending.

The film will be making its premiere on the new website www.Tellyvizion.com owned by rising entrepreneur Sam Golden who is also an actor / comedian and martial artist himself. For more information on the website visit the link and check out all the perks of becoming a part of this site made strictly for independent artists in every field.

Tune in and show your love and support, we very much appreciate it.