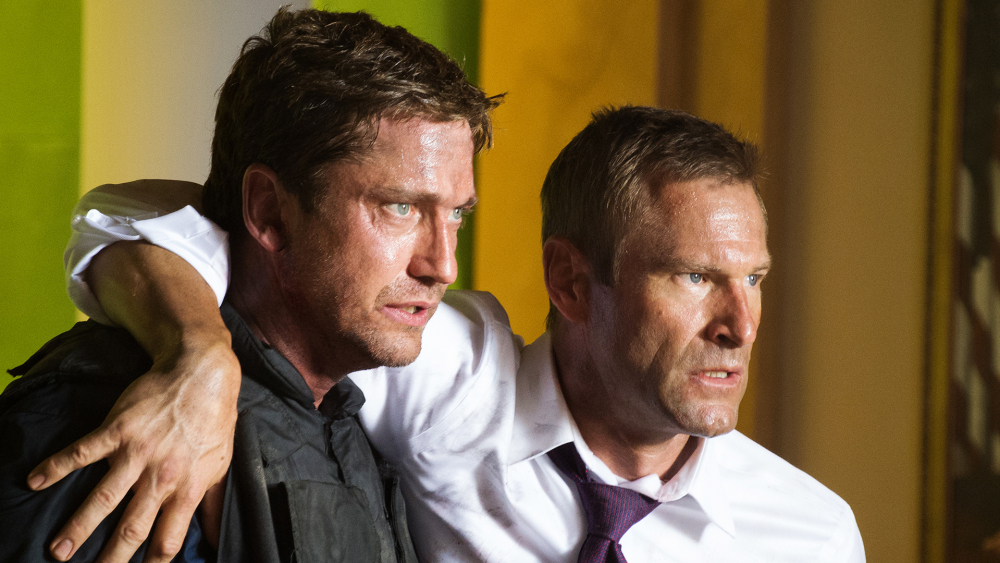 Olympus Has Fallen vs. White House Down

This is one of the more predictable Friday Fights I’ve done because everyone already knows which movie is my favourite but what the hell, let’s go for it anyway. This year we’ve had 2 movies where baddies take over the White House; one is a Hard R old school actioner and the other is a family friendly action comedy.

This is arguably one of my top films of the year because it is pure old school action at its best. You’ve got a tough as nails, bad ass hero in Gerard Butler who is the only man who can stop a bunch of North Koreans from wrecking havoc in the good old ole US of A. This is Butler’s best ever role and I would love to see him do more of these kinds of movies rather than the god awful romantic comedies.

Although the movie lacks the humour and the sharp script of Die Hard, it’s certainly better than the past 2 Die Hard movies. It’s brutally violent and Rick Yune is arguably the best villain of the year. He has no problem shooting hostages when the time calls for it and during the climactic fight scene I was shouting at the screen begging Gerard to kill him. The one scene which is tough to watch is him beating up that woman though; that left a bad taste in the mouth.

The action in this movie is fantastic and despite some very dodgy CGI in places the initial assault on the White House is pure action spectacle; you’ve got insane suicide bombers, RPGs and ‘splosions galore. It’s really well paced and would be a great double bill with Air Force One. Tonally it’s rather similar and also has crap CGI too, now that I think about it.

This movie isn’t helped by the fact that we’d already seen it by another name a few months ago, so it was already screwed. It’s not bad though and has some pretty decent action. As I said in my review it does have James Woods as a villain who can make any movie watchable. Rather than a hardcore actioner though, this really is more of a comedy and may be the better movie to some people’s tastes.

While watching it, we actually would say some of the lines before they were said which showed how lacklustre and predictable the script was. It lacks the punch and the violence of Olympus making it less tense and exciting.

Jamie Foxx is basically an idealised version of Obama in this and essentially plays the role for laughs. I did like Channing Tatum in it though and he was a likable enough hero.

Like Olympus though, this has far too much CGI which ruins several of the action scenes although nothing in this comes close to the White House invasion of the Butler movie.

Well, for me it’s obviously Olympus Has Fallen; it was everything I wanted it to be and essentially a straight up Die Hard clone, which is exactly what I’d hoped. It had some quality violence, great action and the next generation’s action hero, played by a Scot which helps. Although White House Down was fun, it just felt too much like a retread so if I had to choose which one to buy it’ll be Olympus on the first day of release.