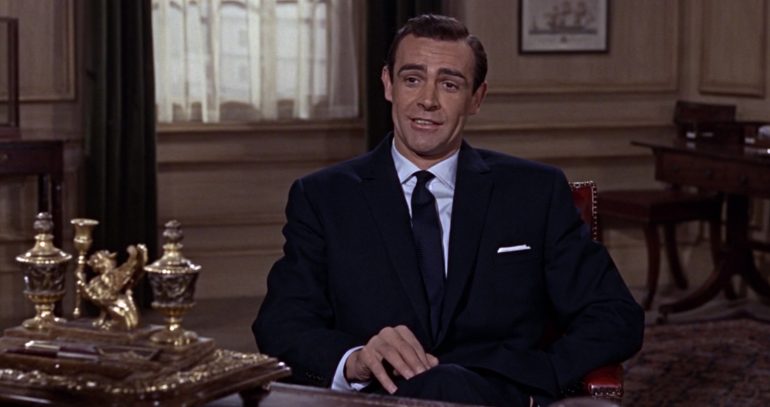 From Russia with Love is one of my top 5 Bond films; it’s everything I’d want with Connery on sparkling form, hot girls, cool music and a great story.

Plot: James Bond willingly falls into an assassination plot involving a naive Russian beauty in order to retrieve a Soviet encryption device that was stolen by SPECTRE.

Review: Now THIS is a Bond movie; Connery will always be the greatest Bond; his easygoing charm, sly wit and cold ruthlessness still stands up today. The script is so good in this movie and Bond has one of his all time greatest fight scenes on a train at the end with the legendary Robert Shaw. I admittedly kept waiting for him to say “Jesus H. Christ, Chief” at some point but alas it didn’t happen.

Connery could utter one-liners better than anyone… ever, and he some some classics in this movie. The way he ogles the women who are practically scantily clad throughout is hilarious. You also get a great chick fight between 2 gypsies which makes any film watchable.

John Barry provides the score which is classic Bond and has the theme tune used at several points; I hate how in the new Bond movies we barely get the theme tune.

This isn’t an action packed adrenaline rush but a bit more of a slow burn thriller and feels like an espionage story. When I was a kid I wasn’t a huge fan of it and found it rather boring but as an adult you pick up so much more. It’s got a great story and was more realisitc than many of the other Bonds, but still manages to be fun and entertaining.

Rosa Klebb is one of the classic Bond henchman, a lesbian with a knife in her shoes… as one does. She’s creepy and when she’s on screen she makes your skin crawl.

Blofeld is at his cat stroking best and thanks to Austin Powers is now more funny than anything, but he’s still a great villain. We don’t actually see his face in this movie either, which I always loved.

Overall, From Russia with Love is one of my top 5 Bond films; it’s everything I’d want with Connery on sparkling form, hot girls, cool music and a great story.