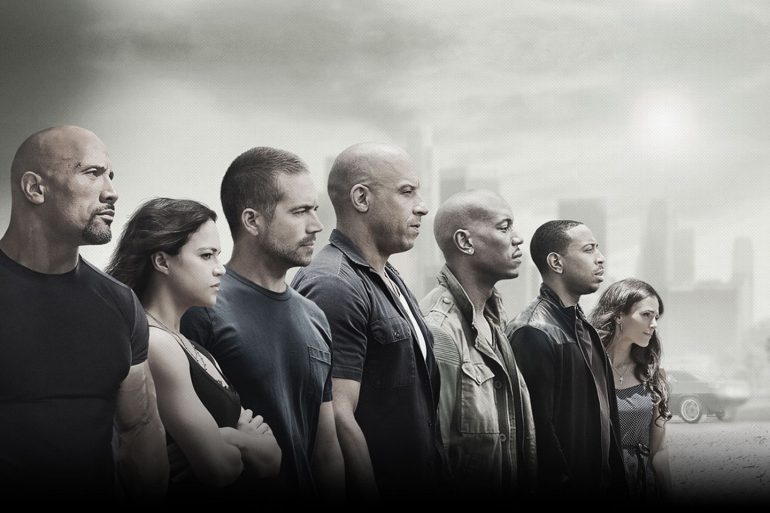 Furious 7 is a summer blockbuster in every sense of the word with a barnstorming villain in Jason Statham and some spectacular action scenes; like I said, if you’re looking for anything deep or meaningful then you won’t find it here but it should definitely be seen on as big a screen as possible preferably with friends and beer.

Plot: Deckard Shaw seeks revenge against Dominic Toretto and his family for the death of his brother.

Review: The tragic death of Paul Walker has overshadowed production of the 7th entry in the Fast & Furious franchise but after some re-shoots featuring Walker’s brothers and some digital trickery we finally get to see Furious 7.

I have to admit that as fun as the Fast & Furious movies are, I’ve never truly loved them; they’re just shut your brain off for a few hours blockbusters and I can barely remember what happened in them 10 minutes after leaving the theatre. Fast Five was my favourite… until now; I think Furious 7 is the best of the franchise and has a real old-school action movie feel to it.

If you hated the other movies then this won’t turn you around. It’s every bit as ridiculous and brain dead but by God is it ever an absolute riot. The opening scene is probably one of the best character introduction scenes of all time; I won’t say anything else about it but from that point on the film grabbed me until the end.

Jason Statham owns this movie, which is no surprise; Deckard Shaw is a classic villain and although he doesn’t say much, he really doesn’t have to. Of course we’ve seen the Stath play a bad guy before in the underrated Cellular but he is easily the best villain of the Fast & Furious series. His fights with Dwayne Johnson and Vin Diesel are worth waiting for although it’s amazing how after beating nine colours of shit out of each other, nobody is actually bleeding. Everyone is invincible in this movie; they survive driving off cliffs, being shot at, parachuting in cars out of planes and more so if you’re looking for things like the laws of physics then you’d best move along.

It’s the ultimate male fantasy with fast cars, big explosions and hot women in bikinis; the camera almost leering at them while the teenagers in the audience cheer through every second.

Our pal Tony Jaa gets to try his hand at playing the bad guy for the first time and he is incredibly effective too; he has some great fight scenes, although it’s hard to believe that Paul would last 2 seconds in a fight with him. Jaa doesn’t have that much to do and has about 1 line of dialogue but it’s a nice intro for him to Western audiences who may not have seen the Ong Bak movies.

I loved seeing Kurt Russell in a big movie again and really it doesn’t get any bigger than this; I hope he comes back to do more movies as he is one of the kings of action cinema.

Dwayne Johnson actually has the smallest role of the film and it’s almost like they weren’t sure what to do with him; he has a few choice lines though as always and his big action scene at the end was quite impressive.

There are some nice throwback moments to the first movie too with an early scene at Race Wars as Dom tries to bring Letty back to her senses after losing her memory in the last movie.

Now on to the most important point: the action. Well as you’d expect the action is generally absolutely spectacular with explosions, fights and car chases every few seconds so there will never be any time for your mind to wander.

However, I did feel that the finale went on for too long and they maybe could have trimmed a few moments; the constant barrage of noise literally is headache inducing but maybe I’m just showing my age. As with the other movies there are moments which are absolute nonsense and the car driving through the buildings was definitely the shark jumping moment, but thankfully it is played entirely for laughs and you just go along for the ride.

The only other thing which bothered me was some of the kinetic camera work got pretty exhausting too and it was like no one could be still for more than a few seconds.

Aside from that I have to say James Wan did a fine job and the film certainly exceeded my expectations.

The sound in the theatre was Dolby Atmos and we watched the movie in Ultra AVX which is the only way to watch a blockbuster of this magnitude. It was crystal clear and you’ll leave with your eardrums bleeding which of course is a must during Summer Movie Season. Brian Tyler’s triumphant score is one of his best and the epic choral music during Statham and Diesel’s final battle is pure Clash of the Titans.

The tribute to Paul Walker was suitably moving but it wasn’t overly sentimental and I didn’t feel myself tearing up or anything; I just smiled and thought it was respectful and that Paul would have been proud.

It’s funny how this series started off as a small movie about illegal street racing but now it has become this huge “Spy Wars” franchise; I can understand why fans of the original would hate the direction it’s taken as this is a long way from from the original idea but I would be lying if I said I was wasn’t massively entertained.

Personally I would make this the final outing for the series as I’m not sure how it would fare without Paul returning but apparently Part 8 is already being written and it’s going to be set in New York.

Overall, Furious 7 is a summer blockbuster in every sense of the word with a barnstorming villain in Jason Statham and some spectacular action scenes; like I said, if you’re looking for anything deep or meaningful then you won’t find it here but it should definitely be seen on as big a screen as possible preferably with friends and beer.