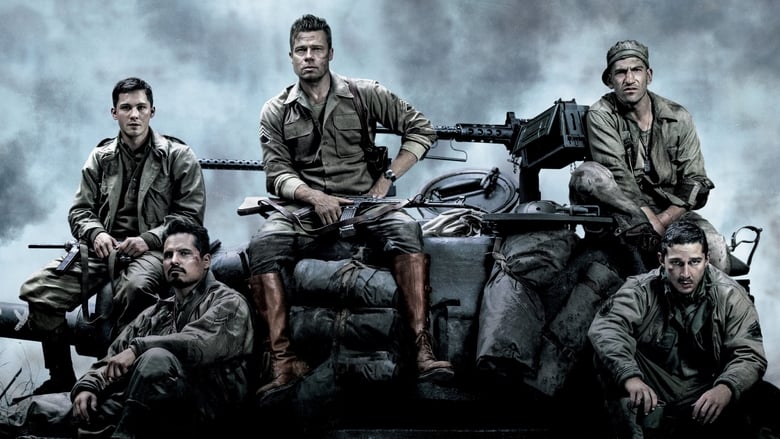 Fury is a grim affair but the performances are excellent and there are some stunning tank battles making this a film worth watching once but it’s not something I would revisit often.

Plot: In April 1945, the Allies are making their final push in the European theater. A battle-hardened Army sergeant named Don “Wardaddy” Collier (Brad Pitt), leading a Sherman tank and a five-man crew, undertakes a deadly mission behind enemy lines. Hopelessly outnumbered, outgunned and saddled with an inexperienced soldier (Logan Lerman) in their midst, Wardaddy and his men face overwhelming odds as they move to strike at the heart of Nazi Germany.

Review: I go into spoilers here just in case you haven’t seen this movie before.

Believe it or not I had never watched Fury until the other night; I can take or leave war films as I generally find them depressing but I’ve always been curious about this as it has such a great cast including Brad Pitt, Michael Peña, Shia LaBeouf and Jon Bernthal.

Fury is indeed grim but it’s an excellent film that looks fantastic and the cast give it their all. Brad Pitt’s tank commander Don ‘Wardaddy’ Collier is one of his more challenging characters and is hard to root for at times as are his crew who have seen too much war.

At one point Don forces new recruit Norman (Lohan Lerman) to shoot an unarmed German prisoner in the back which is the film’s hardest scene to watch. Another tough moment is the dinner scene with Jon Bernthal’s Grady and the boys interrupting Don and Norman with some German ladies but once we understand why they seem upset it makes sense.

Bernthal is incredible in this and Grady is for the most part totally unsympathetic until his moment when he apologizes to Norman… so you know that within the next few scenes he is going to die.

It’s not exactly cheerful stuff and not a movie I plan on watching too often but I’m glad I finally checked it out as it captures the loss of humanity and hopelessness of war.

The battle scenes are visceral and give you an idea of how horrifying war can be so by the time you reach the end credits you’ll be relieved it’s over.

The score is spectacular with some nice choirs especially during the finale/end credits so it works well with the tone of the film.

Overall, Fury is certainly worth watching at least once and the performances are first rate; it doesn’t exactly leave you with a smile on your face but it is a reminder of how awful war is and why it should be avoided whenever possible.